On a day full of Women's FA Cup history, Chesham United made their own mark, by reaching the Third Round of the competition for the first time with a dominant display leading to a 6-1 away win over Kent Football United.

Hat-tricks for both Gemma Fraser and Kim Farrow inside the first hour meant that the outcome was never in doubt.

Chesham looked dangerous every time the ball was played from deep over or through the Kent defence in the first half. Farrow ran clear to finish low for the first on seven minutes. Fraser, the FAWNL Division One South West leading scorer, added the second and Farrow the third on 25 minutes in similar fashion.

When Kate Bowers' perfect crossfield pass released Fraser on the right to run in the fourth on 34 minutes the afternoon threatened to become difficult for the hosts.

In fact, Kent had looked threatening at times going forward and the impressive Megan Burrows reduced the arrears with a fine finish of her own after being sent clear by Nancy Housego on 40 minutes

Burrows was denied a second by a fine save from Amber Taylor early in the second half. However, any hope of a Kent comeback was quickly extinguished as first Fraser and then Farrow completed their hat-tricks with crisps finishes after clever Chesham build up play had opened up the Kent defence.

With the outcome decided both sides made a flurry of substitutions. Chesham's Becky Bloor drew a fine save from home keeper Charlotte Greenwood but it was Kent's replacements who seemed to give them greater control. In their best period of the match, Burrows forced another fine save from Taylor, then she fired inches wide with a curling effort  from the edge of the area on 75 minutes.

The  determined visitors soon regained control and Greenwood made another good save to deny Chesham a seventh goal late on. The reward for this historic Chesham United victory is an intriguing home tie with FAWNL Division One South East high flyers Billericay Town next Sunday. 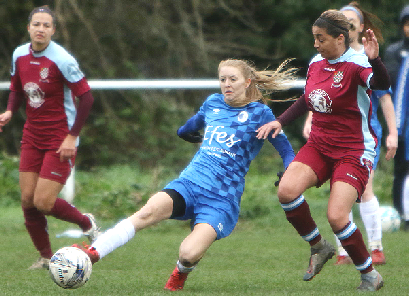 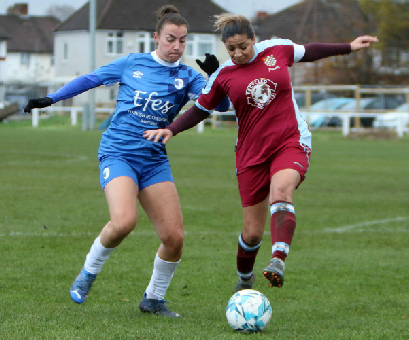 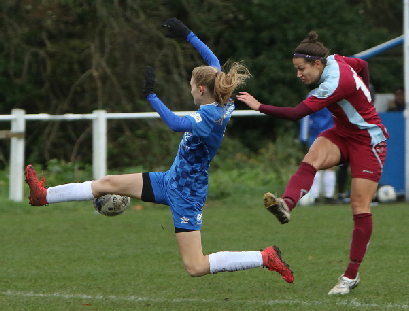