Fylde Women have secured their place in the quarter finals of the League Cup, but only after being pushed all the way to extra time in their 3-2 victory away to Norton & Stockton Ancients. Faye McCoy gave Fylde the lead from the penalty spot in first half injury time but two goals in a five minute spell from Bianca Owens turned matters around in Norton's favour. McCoy then took the game into the extra period when she converted another penalty and she completed her hat-trick with what proved to be the winning goal.

Oxford Utd climbed up into second place on Sunday - their highest position of the season to date - with an impressive 3-0 victory away to Keynsham Town. Beth Lumsden gave the U's the lead during the first half, before a looping header from Riva Casley and firm Lauren Haynes strike sealed the points for their side.

Crawley Wasps meanwhile cemented their place in the top half, thanks to a 2-0 success at Milton Keynes Dons. Iesha Swaby netted both goals for the Wasps, scoring once in each half.

On Wednesday night, Portsmouth and Southampton FC Women met for the second time in a matter of days, this time in the league at Fratton Park. Once again it proved to be a tight encounter and once more, it was Southampton who had the edge, this time a late Danielle Rowe own goal giving them a 1-0 victory, which takes them back into second place.

Durham Cestria and Stockport County remain separated by one point in the table after their meeting finished in a 1-1 draw. Durham led for most of the game through Jordan Atkinson's first half goal, but Stockport came up with a late response, Jess Battle earning them a share of the spoils with a couple of minutes remaining.

Barnsley meanwhile picked up three important points as they edged out FC United of Manchester by the odd goal in seven. Emily Brett scored twice for Barnsley along with Nat Shaw and Jodie Michalska, whilst FC United's replies came from Chelsea Flanagan, Ellie Rigby and Ashleigh Hayes.

Doncaster Rovers Belles opened up a lead of four points at the top of the table with a 2-0 victory against Solihull Moors. Jessica Price and Niamh Doody scored the goals for the Belles as they increased their advantage over second placed Lincoln City, who were in FA Cup action.

Boldmere St Michaels meanwhile edged out Leek Town 3-2, to move themselves back into the top three. Evie Billingsley, Annie Highway and Jessica Lundie all netted a goal apiece for the Mikes, with Cassie Hyde and Katie Gibbons replying.

Peterborough Utd leapt into a mid-table position with a fine 3-1 success away to Sporting Khalsa. Kier Perkins and Stacey McConville put the Posh Ladies two ahead and after Laura Smith reduced the arrears for Khalsa on the hour, Perkins wrapped up the win for Peterborough with her second goal.

Burton Albion also picked up an important away win, 3-1 at Bedworth Utd and they have moved out of the bottom four places. Millie Wortley scored twice for the Lady Brewers along with an own goal, with Sophie Wilson replying.

Whilst Billericay Town were in FA Cup action, Hashtag Utd took the chance to replace them at the top of the table with a 7-0 victory against Stevenage Women. Malika Apindia Gille led the scoring with a four-goal haul and she was joined on the scoresheet by Sasha Adamson, Grace Gillard and Emma Samways.

Third placed Actonians Ladies were held to a 1-1 draw by Cambridge City. Ellie Cullum was on target for City, whilst Actonians' goal came from Sharon Odofin.

The result was Actonians' fifth draw of the season but that tally does not match that of London Seaward, who shared the points for the sixth time in the campaign, finishing level at 3-3 with Cambridge Utd. Hayley Barton, Egle Trezzi and Abbey Dell all scored for Seaward, whilst fourth placed United replied with a Ruth Fox double and Abbi Griffin.

First half goals from Brogan Moore and Erin Pope saw Queen's Park Rangers to a 2-1 win away to Norwich City, whose consolation came from Natasha Snelling.

Cheltenham Town have gone back to the top after running out 6-0 winners over Poole Town. Lacy-Jai Liggett, Tamzin Hayward, Holly Rogers, Billie Haynes, Jade Grove and Charlotte Criddle all scored a goal apiece for the Gloucestershire side who now have a lead of two points.

This is because AFC Bournemouth moved themselves into second place on the back of a 3-1 victory over Swindon Town. Katie James and an own goal put the Cherries two ahead early on and although Megan Attenborough pulled one back for Swindon just before half time, Lucy Cooper sealed the points for Bournemouth with their third goal around the hour mark.

Maidenhead Utd and Portishead Town meanwhile battled out a 1-1 draw which means that the one point gap between the two teams remains. Both goals came in the opening twelve minutes of the game, Maidenhead taking the lead after 60 second through a Ruby Lowe own goal, and Portishead levelling shortly afterwards via a penalty from Alanna Torrington.

Huddersfield Town booked their place in the last eight of the Reserve League Cup with a 4-2 victory away to Durham Cestria. Cassidy Clift scored twice for Town along with Falone Sumaili and Macy Ellis, whilst Durham's replies came from Jasmine Elliott-Wood and Erin Nicholson.

Two second half goals from Leeds Utd earned them a 2-1 win at Doncaster Rovers Belles in the Reserve League Plate. The Belles had taken a first half lead through Deborah Barry but it is Leeds who progress to the quarter finals.

Middlesbrough have gone to the top of the Northern Division, thanks to a 3-1 success against Hull City. Faye Dale was on target twice for 'Boro along with Jess Holder. Grace Foy and Daisy Mason each netted doubles for third placed Chorley as they won 4-1 at Stockport County and Bradford City notched up their first victory, 2-0 over Liverpool Feds.

Two of the top three in the Midland Division met each other and it was Loughborough Lightning who emerged as 2-1 winners over previously unbeaten Nottingham Forest. Indiana Totty and an own goal gave Loughborough the points, with Cameron Farthing replying. Dulcibella Binns, Tara Kirk, Rebecca Moises and Monique Price accounted for the goals as Leicester City beat Solihull Moors 4-2. Olivia Stubbs netted four times and Asia Dhillon the other for West Bromwich Albion in their 5-3 victory over Stoke City, and Sporting Khalsa won 2-0 at Lincoln City thanks to Chelsey Wright and Abby White.

The top of the table clash in the South East Division went the way of Hashtag Utd, who took over at the summit after beating former leaders Watford 4-2 with a goal apiece from Kaci Crook, Lily Wolstenholme, Jessica Wright and Isabella Darby. West Ham Utd meanwhile won 6-4 against Cambridge City, Aulona Xhema and Rebecca Chitolie each netting twice along with Libby Skinner and Aminata Lewis.

One match was played in the South West Division, leaders Southampton FC Women scoring six times without reply past Portsmouth. Charley Evans, Emilie Castagna, Kaylee Buckingham, Jess Tanner, Shannon Sievwright and Sky Bedwell were all on target for the Saints. 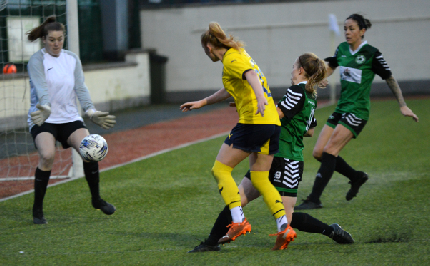