Bridgwater United caused a surprise in the Third Round of the Vitality Women’s FA Cup on Sunday when they won 1-0 against Championship high fliers Crystal Palace.

The Somerset club received further good news the following day when they were drawn at home to WSL side Manchester United in the last 32.

Laura Holden was her team’s heroine in the win against Palace as she scored the only goal of the game. She praised her team mates for a good all round performance and, whilst relishing the chance to take on a top WSL club in the next round, insisted that they won’t be taking their eye off the ball as far as the league is concerned:

WSS: Congratulations on a great result on Sunday, how pleasing was it to beat an in-form side from the league above?

LH: It was brilliant and definitely the best moment of my career so far, we proved to ourselves, our staff and our fans that we are capable of playing at a high standard and ultimately as a team, we want to be playing at that standard week in week out. Before the game we all said as a team if we stick together and fight every minute of the game, we have a high chance of winning and we did exactly that, and I’m just so grateful to be part of such an amazing group of girls.

WSS: After you scored what proved to be the winning goal, were there any anxious moments for the team in the last few minutes of the game?

LH: Of course there were some moments towards the end. Palace looked as though they were going to come close to equalising, but we had worked so hard for the entire game and it would have been a shame to see them equalise. The team definitely kept their cool and as soon as the final whistle went, there was a massive sigh of relief from everyone, we deserved that win and no one in the team was going to stop until we achieved just that!

WSS: Were there any particularly good performances from any of the players on the day or was it a complete team effort?

LH: Everyone’s performance was solid, even when the subs came on in the second half. Everyone played a part in that win and I think that the girls will agree, not one person looked out of place, we stuck together and we fought as a team.

WSS: The draw for the Fourth Round has been a great one for you, pairing you with Manchester United. How do you feel about the prospect of them coming to Fairfax Park?

LH: To be drawn against Manchester United is massive for us, for the club we are making history! I truly believe that if we perform the way we did against Crystal Palace we have a very good chance of coming away with a result. Everyone is buzzing for this game and there’s no pressure on us, we’ve got this far and to be drawn against one of the biggest clubs in the WSL is just a dream come true.

WSS: In the meantime, you take on Chichester & Selsey in the league this Sunday, a very important game but for different reasons?

LH: Absolutely, it is an important match for us as it's the next one in our schedule. We have been quite clear in training this week that Sunday doesn't mean much if we don't continue to perform in the league and keep working towards our ultimate goal in the league. We know that we can't afford to drop many more points over the rest of the season if we are going to achieve the highest place finish we can.

WSS: Your division is a very strong one this season, so are you satisfied overall with the way things have gone given all the changes at the club over the summer?

LH: We are still building as a club and things are being put in place to give us the best possible outcome of being where we know we can be as a team, and that’s competing at the top with all the full time teams! Everything happens for a reason and we can’t ignore what we have been through as a team - however I believe what’s happened has made us stronger as a group and made us realise if we stick together we can achieve anything! We can’t let things define us, it’s how we get through those situations that will make us stronger to push on to where we know we can be.

WSS: Do you feel that, realistically,  you can still catch Ipswich?

LH: Of course we can still catch Ipswich, the league isn’t over yet and we will fight until the very last game. As a group we have proven over the last week, we are capable of performing at a high standard and competing with full time teams, so there’s no reason we can’t keep this momentum going and get a good result and position in the league.

WSS: Bridgwater have signalled that they are an ambitious club, based on what you have seen so far, are you confident that the club is on its way towards achieving those ambitions in the future?

LH: Definitely, I wouldn’t want to be a part of the club if I didn’t believe the ambitions we are capable of for the future, it’s exciting and I’m grateful to have the opportunity to be part of such an amazing group of girls! Bridgy is family!

Our thanks to Laura! 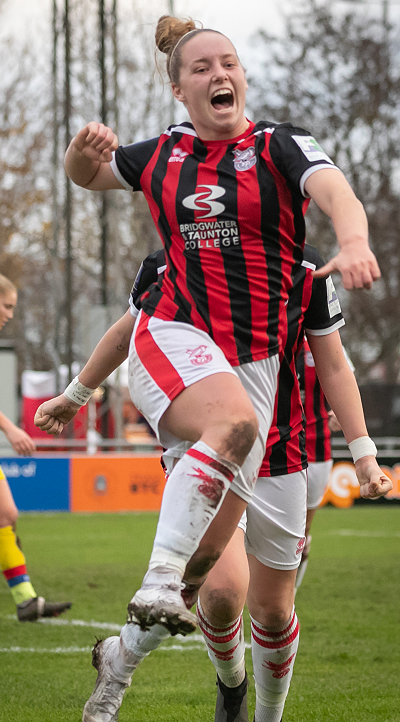