Beattie joins the club for an undisclosed fee from Danske Bank Women’s Premiership champions Glentoran FC on a three and a half year deal and becomes Head Coach Eileen Gleeson’s first signing.

The 19-year-old was top goalscorer in the 2021 Danske Bank Women’s Premiership season with 23 goals.

Beattie has made six appearances for Northern Ireland and scored her first goal for her country in their FIFA World Cup Qualifier victory over North Macedonia in November.

Kerry Beattie said on joining Glasgow City: “I feel absolutely delighted to be joining a team as prestigious as Glasgow City. I am looking forward to this next chapter in my life and the opportunity to develop my game further greatly excites me.

“I can’t wait to meet the team and get to work.”

Eileen Gleeson commented: “I’m delighted to welcome Kerry to the club. Kerry is an exciting young prospect with the qualities that we look for at Glasgow City FC.

“I’m looking forward to working with Kerry and have no doubt that she will adapt quickly and be a great addition to the team.”

Beattie will wear the number 11 shirt for her new club and, international clearance depending, will come straight into the squad for Sunday’s Scottish Women’s Cup game against Queen’s Park, which takes place at Petershill Park at 4pm. Tickets for this match are available online via glasgowcityfc.co.uk/shop. 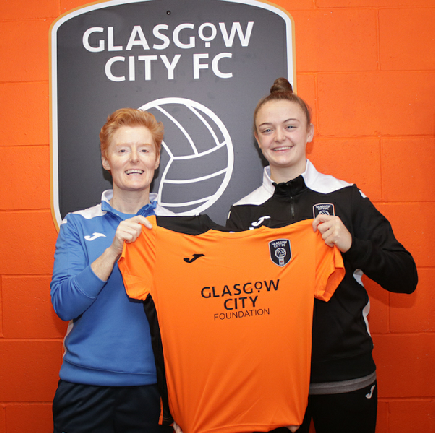