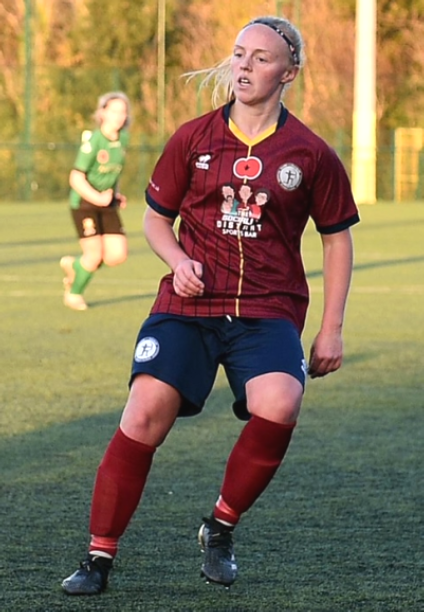 We apologise for the website being offline recently for circumstances beyond our control. We shall restore our regular service as fast as possible, including our acclaimed News Archive section!

The inaugural season of the Genero Adran League in Wales is turning out to be a three horse race for the title and perennial contenders Cardiff Met Women stepped up their own challenge on Sunday as they came from behind to beat The New Saints 6-2.

Cardiff Met midfielder Sophie Hancocks, who is also the team’s vice captain, gave her team a lot of praise for their second half performance against TNS, in which they scored five times, and told us of their confidence that they can catch league leaders Swansea City:

WSS: What a great second half! Did you always feel confident that you would go on to win the game, even when you were behind?

SH: We were all confident as team that we can put in a performance second half and show character and quality to get the three points.

WSS: Four goals in the last twenty minutes saw you home, do you feel that the 6-2 scoreline accurated reflected the game overall?

SH: I think it accurately reflects the character and quality we have in our squad, to come from behind and get a well earned result which we as a team will gain confidence in going forward. In the second we showed dominance and the scoreline reflects that half.

WSS: The win takes you back into second place, but were you hoping that the game between Swansea and Cardiff City would end in a draw?

SH: I think that it’s important we try not to have our position in the league be left to other teams and their results but from reports and highlights, it seems the game between the two sides was a close game.

WSS: Have there been many changes to your squad since the end of last season?

SH: Yes, we have added further strength in our squad across the team with Tiggy and Jessie in defence and Laura in midfield, to name a few.

WSS: This week you play away to Pontypridd Town who are in the battle for a top half place, what kind of game are you expecting against them?

SH: We are expecting a difficult but well contested game. Pontypridd are a good side which we know will be difficult to break down, but we are working hard in training to ensure that we came away with three points.

WSS: You remain three points behind Swansea but at the time of asking, they have a game in hand. How confident are you that you can catch them before the end of the season?

SH: We are extremely confident we can catch them, the title run is not over by a long shot and we have the strength in depth to change how that league table looks by the end of the season.

WSS: With the club having won so many trophies in the last few years, will it only be seen as a successful season if you lift some silverware?

SH: I think for any competing football team, you want to win silverware in a season so that is always our aim every season.

WSS: Overall, what have your impressions been of the Genero Adran League since it launched at the start of the season?

SH: The launch of the new league has been great and it’s very exciting to be a part of it. Hopefully the women’s game in Wales continues to grow and develop.

Our thanks to Sophie!