Manchester City Football Club is delighted to announce that captain Steph Houghton has signed a contract extension at the Academy Stadium.

The 33-year-old, who has been on the books of City since the reformation of the women’s team just over eight years ago, has committed her immediate future to the Club.

An instantly recognisable figure in not only the women’s game but football as a whole, the defender was awarded an MBE for her services to the sport in 2016 and currently holds the record for the most Manchester City Women appearances with 206 in all competitions.

Chipping in with 21 goals from defence during her time in sky blue so far, the centre half has lifted seven trophies with City to date including three Women’s FA Cups, three Continental Tyres Cups and one Barclays FA Women’s Super League title.

An influential figure both on and off the pitch, Houghton’s dedication to the game has earned her a plethora of personal accolades including two City Player of the Season awards and a number of similar successes with the PFA, FAWSL and North West Football Awards to name but a few.

One of the most decorated figures in English football, she has over 120 caps to her name for her national team and has skippered her country for the past eight years, helping the team to reach the semi finals of the last two FIFA Women’s World Cups.

Also captaining Team GB last summer in her second Olympic Games appearance, Houghton has now put pen to paper on a new deal that will extend her stay at the Academy Stadium beyond this summer.

Speaking about her new contract, Houghton said: “I’m delighted to sign an extension here at City.

“Once the talks started, there was only ever going to be one outcome and it was the easiest decision I’ve ever made, to commit my future to this football club and continue on this unbelievable journey.

“The eight years I’ve been here so far have flown by – when people say how long it is, I really can’t believe it! For me though, it’s always been about being at Manchester City and being a part of this Club, for now and for the future.

“That’s why I wanted to commit – to really show my loyalty to my team, to my Club and to everybody who has helped me along the way so far.”

“What she has contributed to this Club and women’s football as a whole throughout her career so far is incredible – she is a true legend of the game in all senses of the word.

“Not only does she give everything she has on the pitch, she also maintains the highest level of commitment off it in terms of supporting her teammates and helping them to improve, and that sums up just how much of a consummate professional she is.

“Her contributions and dedication to the team and the Club as a whole are so incredibly important, with the successes and records she has achieved so far testament to that.

“It has been such a privilege working with her over the last year-and-a-half and I’m incredibly excited to continue that moving forwards.”

Steph Houghton is the second Manchester City player to commit her future to the club in recent weeks, with Lauren Hemp having signed a two-year contract extension with the club. 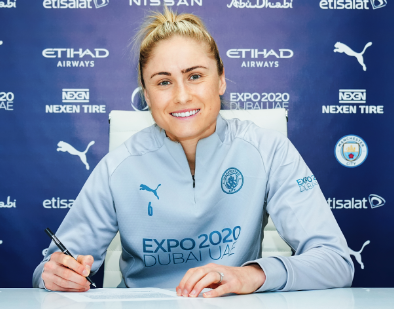