Hashtag Utd claimed a scalp from the level above when they beat Chichester & Selsey on penalties after the teams had shared a 2-2 draw. Cerys Adams and Malika Apindia Gille were on target for the Tags, with Chichester scoring through Sarah Saunders and Jane Yeates, with Hashtag winning 5-4 in the shootout to take themselves into the last eight.

Oxford Utd booked their place in the quarter finals with a 2-0 victory against Billericay Town. Gemma Sims gave the U's a seventh minute lead and Rachel Panting wrapped up the win with the second goal, midway through the second half.

Southampton FC Women are the third team to go through after they defeated Milton Keynes Dons 2-1. Alisha Ware and Leeta Rutherford scored the goals for the Saints, with the Dons' consolation coming from Marianne Taho.

Cheltenham Town are through to the quarter finals after winning on a penalty shootout against West Bromwich Albion, from the division above. Leigh Dugmore was on target for Albion, with Georgie-Marie Barbour-Gresham scoring in injury time to earn Cheltenham a 1-1 draw, before the Gloucestershire side triumphed 5-4 on spot kicks.

Cherelle Khassal and Shannon Albuery each scored twice as Portsmouth progressed smoothly from an awkward away tie, thanks to a 4-0 success against Queen's Park Rangers.

Exeter City continued their fine recent run of form by winning 3-0 away to London Seaward. Connie Pengelly gave Exeter a first half lead, before an own goal and Sarah Stacey made the game safe after the break.

AFC Wimbledon needed extra time before returning from Portishead Town with a 2-1 victory under their belts. After Alanna Torrington had fired Portishead in front on the half hour via a long range strike, both sides missed from the penalty spot during the second half and Rebecca Sargent headed in from a corner to level the scores. Megan Stow drilled in a 25-yard strike of her own in the opening minute of extra time and Wimbledon saw the game out to take themselves through.

Sporting Khalsa are also in the last eight after a narrow 1-0 victory over Boldmere St Michaels. Laura Smith settled matters with the only goal of the game, five minutes before half time.

One match was played in the division on the weekend and it saw two of title challengers go head to head, with leaders Derby County playing host to Fylde Women. Derby had the better of things in the first half, which gave way to a more even second half, the game ultimately finshing goalless leaving the Ewe Rams three points clear at the top, now ahead of Fylde who move into second place, above Wolverhampton Wanderers on goal difference.

Bridgwater Utd have moved back into the top three and are just one point off second place following their 3-0 victory away to Hounslow Women. Meesha Dudley-Jones opened the scoring for the Somerset side after fifteen minutes and she went on to hit a hat-trick as Bridgwater secured their seventh victory of the season.

Gillingham are continuing to have a good season and are up to fifth after a 1-0 success at Cardiff City Ladies, Phoebe Leitch scoring the only goal of the game midway through the first half.

The three league matches on Sunday all produced away wins and the home side failed to score in any of them. London Bees completed the season by winning 3-0 against Plymouth Argyle, Jade Bell giving them the lead shortly before the interval and Jo Wilson securing the points by netting a second half brace.

The only game in the division over the weekend saw Liverpool Feds open up a lead of eight points at the top of the table, thanks to a 3-1 victory away to FC United of Manchester. Paige Cole gave the Feds a first half lead which was doubled after the break by Abby Pope, and after Chelsea Flanagan had reduced the arrears for FC United, Rosie Kinvig wrapped up the result for her side late on with the third goal.

Doncaster Rovers Belles have taken over at the top of the table following their 2-1 victory over Peterborough Utd. Nadia Khan and Jasmine Saxton were both on target for the Belles, whilst the Posh Ladies replied through Cassie Steward.

Solihull Moors moved back up into the top half with a 6-1 victory away to Leek Town. Tiana Russell-Cartwright (2), Zoe Creaney, Abby Jackson, Jessica Lowe and Charlotte Leedham accounted for Solihull's goals, with Chantelle Gallagher replying.

Actonians Ladies consoldiated themselves in third place, thanks to a 5-1 win over Stevenage Women. Alessandra Barreca gave Actonians a first minute lead and Sharon Odofin and Maria Ledezma-Viso added further goals after the break, before Meila D'Santos rounded off the scoring with a late brace.

Harlow Town meanwhile greatly boosted their hopes of climbing out of danger when they won 1-0 away to Cambridge Utd. Olivia Bilson scored the only goal of the game for Harlow on the stroke of half time.

Southampton Women hold on to the leadership of the division despite going down to their second defeat of the season, beaten 1-0 by AFC Bournemouth. Jade Bradley scored the only goal of the game for the Cherries, who are now only two points off the pace and have games in hand.

Maidenhead Utd moved themselves into a mid-table position on the back of a 4-0 victory over Larkhall Athletic. Kirsty Matthews was on target twice and she was joined on the scoresheet by Nicole Barrett and Tina Brett.

Chorley went through to the quarter finals of the Reserve League Cup after they defeated Brighouse Town 3-1. Wolverhampton Wanderers meanwhile ran out 4-0 winners at Milton Keynes Dons, courtesy of doubles from Grace Gregory and Chantelle Teare. Portia-Milan Langley-Wright and Amelia Lightfoot were the markswomen for West Bromwich Albion as they won 2-1 against Nottingham Forest, whose consolation came from Arryana Daniels. Claire Huggins and Rebecca McShane were the scorers for Enfield Town in their 2-0 success at Cambridge Utd and AFC Wimbledon edged out London City Lionesses by the odd goal in seven, courtesy of a Charlotte Flood hat-trick and Ella Gilheaney. Ella-Mai Coutts netted twice and Lalini Colas Salpadoru the other as Crystal Palace won 3-1 at Charlton Athletic and a Kaylee Buckingham hat-trick spearheaded Southampton FC Women to a 6-2 victory over Bridgwater Utd, Sky Bedwell adding a brace and Emilie Castagna rounding off the scoring.

Madi Hudson led the scoring with a four-goal haul as Stockport County won 6-0 away to Bradford City. Ellie Richardson and Ellie Price supplied the other goals for County. Loughborough Lightning marched through by beating Solihull Moors 8-2, Emily Gunn hitting a hat-trick with Indiana Totty, Millie Quaintance, Antonia Williams and Olivia Gaffney also on the scoresheet. Sporting Khalsa and Leicester City meanwhile finished level at 2-2, Emma Harrison and Tara Kirk scoring for Leicester, before Khalsa emerged as 6-5 winners from the penalty spot. Shannon Shaw bagged a hat-trick and Rosanna Mead the other as Cambridge City won 4-0 at Hashtag Utd whilst Ronnell Humes (2), Assia Fatri and Adenya Henry were among the scorers for Watford as they beat Stevenage Women 8-2. Portsmouth defeated London Seaward 4-1, thanks to a goal apiece from Grace Laidlaw, Lucy Roberts, Macey-Nikiah Walters and Isabella Doel, whilst Keynsham Town ran out 6-0 winners over Chichester & Selsey. 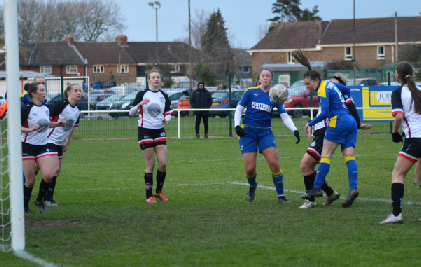