Huddersfield Town have a good record in cup competitions in recent seasons and the signs are there that they can have another good run, reaching the Third Round of the Vitality Women’s FA Cup with a 3-0 victory away to Sheffield FC on Sunday.

Paige Crossman scored the opening goal in the win against Sheffield and she is looking forward to taking on Loughborough Lightning in the next round this week, as well as keeping up their interest in the FAWNL Northern Premier Division title race:

WSS: Well done on reaching the next round of the FA Cup, do you feel that the 3-0 scoreline reflected the game overall?

PC: We had plenty of chances to have put the game to bed much sooner, but Sheffield had a game plan and put bodies on the line to keep the scoreline to three.

WSS: All of the goals came in the second half, was it a case of remaining patient until the breakthrough came?

PC: Yes, we knew and prepared for Sheffield to defend compact and deep, so we had to stay patient to break the deadlock.

WSS: That makes it seven wins in eight games for yourselves, as well as three clean sheets in a row. Do you feel the team is finding its best form now?

PC: We are looking in good shape and are continuing to improve weekly, but I think we all still believe we have more to show and deliver.

WSS: Your reward for beating Sheffield is a home tie with Loughborough Lightning this week, who are familiar opponents to yourselves. What sort of game are you expecting?

PC: We are expecting a different game plan from Loughborough this week, a faster tempo I imagine. So we will adjust ourselves accordingly.

WSS: The club has had good cup runs in recent seasons, is that an incentive for possibly doing it again?

PC: I’m certain I can speak for the players and the club when I say we want to challenge ourselves and going on a good FA Cup run opens the doors for us to test ourselves against higher league opposition.

WSS: Currently you sit fourth in the league, just behind the leading teams. Do you feel that your season is going as well as expected?

PC: We haven’t had the perfect start to the season, we would have hoped or expected to have picked up a few more points overall from some of our fixtures. However, our recent midweek win over Fylde was an important three points for us and a platform for us to build the remainder of our season from.

WSS: Just six points cover the top five teams in the table at present, can you see the title race being a close one for the remainder of the season?

PC: With everyone still having to play each other at least once, I think the league is still open depending on how other results play out.

WSS: Huddersfield have been among the leading teams in the division for the past few seasons. Do you feel the club is ready for the step up to Championship football if you can get there?

PC: There is the ambition at the club, but we are currently focusing on one game at a time and what we can do in the present moment.

Our thanks to Paige! 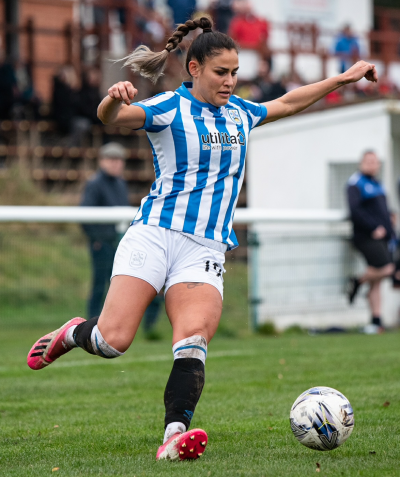