Billericay Town progressed into the Fourth Round of the Vitality Women's FA Cup with a stunning display of attacking ability to run in ten goals away to Chesham United.

In an encounter between two FAWNL Division One teams it was the Essex Division One South East high flyers who notched up goals from all angles, five in each half. Chesham had plenty of promising moments themselves to have at least cut down the margin of defeat but nothing would go in for the hosts on a difficult debut at this stage of the competition,

Shannon Drewe hit a lofted cross from the left which drifted in at the far post to open the score after an even first ten minutes. Rebecca May outpaced the defence to convert a Sam Pittuck through ball to double the lead almost immediately and then Lucy Jones hit a superb third from 25 yards beyond Amber Taylor's dive on 15 minutes.

May added her second from close range from a corner on 25 minutes but Chesham then had their best spell of the match and went close to reducing the deficit, hitting a post and forcing Alex Baker into a couple of saves before May completed her treble before the break with another close range finish.

The restart brought no respite for the Chesham defence as Jones converted a penalty on 47 minutes. A lovely move set up the seventh for sub Georgie Morton, a curling right wing cross by Logan O'Shea, flicked on by May for an emphatic finish.

Zoe Rushen netted the eighth with another spectacular curling 20 yard shot off the far post again giving Taylor no chance. By now both teams were going in full attacking mode with the hosts trying hard to give Gemma Fraser and her fellow forwards a chance to score but the Billericay defence was in no mood to give up the clean sheet.

At the other end, Rushen laid on a second goal for Morton and then completed the scoring with a clever free kick from a tight angle just before the final whistle to give a scoreline a cruel edge.

Billericay had been absolutely excellent, inventive and ruthless in attack and with some fine individual performances. For Chesham, it was a disappointing day but the team kept trying to play positively right to the end. 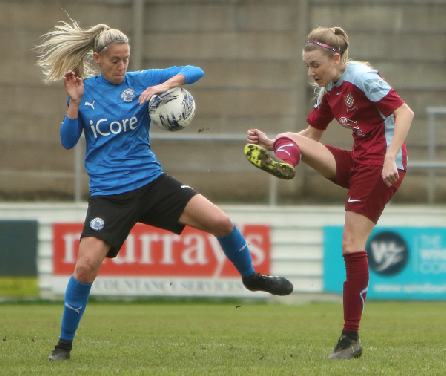 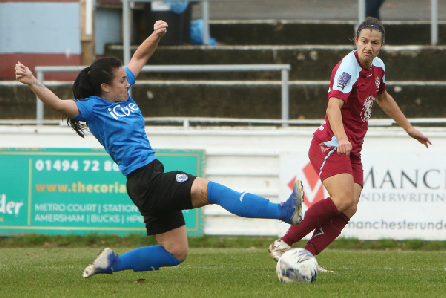 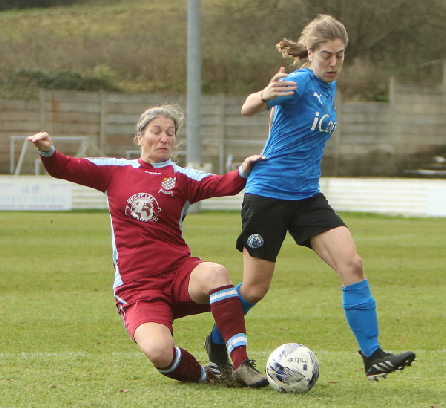 Kerry Stimson attempts to block a pass
from Gemma Fraser.

Dawne Campbell slides in to challenge

Rebecca May  (a penalty was awarded).