Sheffield United are delighted to announce the signing of forward Georgia Walters from FA Women’s Championship side Liverpool on a deal until the end of the season.

The 28-year-old brings more experience and quality to Neil Redfearn’s attack and made her debut on Sunday against Coventry United.

A senior international for Wales, Walters joined current league leaders Liverpool at the start of the season after an 18-month spell at Blackburn Rovers, where she found the net three times last season.

Previously of Swindon Town, Reading and Tranmere Rovers, Walters brings more attributes to the United attack and head coach Redfearn is delighted to get his first deal of the January transfer window signed and sealed.

“We’re really pleased to secure the signature of Georgia as she brings both Championship experience and international experience with Wales.

“She’s a striker that can play in a two or lead the line and she’s already shown in training she’s excellent with her back to goal and brings into the game really well.

“Georgia will complement the strikers we already have at the club and add real competition up front.”

Walters also spoke of her delight at getting the deal done and is hoping to make an impact between now and the end of the season.

“Sheffield United has a really good squad and if I’m honest I don’t think the current league position reflects the quality in the squad and the team, so I’m really happy to be on board and grateful it’s all gone through before the weekend.” 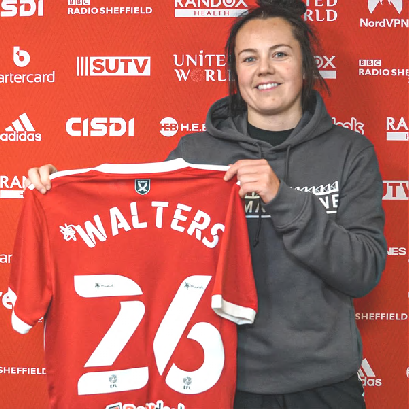