AEK Boco have been raising money for charities throughout January and are approaching the end of 31 days of what some people would call the “ultimate sacrifice”.

The South West League Eastern Division side have given up drinking alcohol for the month and Boco player Sasha Ferris, who organised the venture, explained:

“As a group of renowned drinkers, we have decided to take part in dry January this year to raise money for two charities. A lot of people that know us think we cannot achieve it and have already written us off.

“We really want to prove people wrong and in the process, raise as much money as possible for two very important charities. This will help soften the blow that we have decided to put ourselves through this ridiculous ordeal!

“The charities we have chosen are Macmillan Cancer Support and The MSA Trust, two charities that are linked to us all in different ways. Any donation is greatly appreciated and we plan to split anything raised equally between the two.

“If we smash our target out of the park, any additional funds raised we will be donating to AEK Boco Ladies football team.

“Thank you in advance for any support and donations! If you wish to contribute, please go online to our page at https://gofundme.com/f/juquyp-dry-january-2022?utm_source=whatsApp&utm_medium=chat&utm_campaign=p_cp+share-sheet.

AEK Boco manager Abi Nicholas told Women’s Soccer Scene: “These girls have already proved that when they put their minds to something they can achieve it and what a fantastic gesture.

“I’ve seen them drinking non-alcoholic drinks, soft drinks and water over the last couple of weeks and not a drop of alcohol has been touched. To some this may seem easy, but these girls are extremely social and are always out and about keeping themselves socially entertained.

“We’re very proud of them for making such a huge effort to raise money for two charities which are not only close to their hearts but close to the heart of so many other families - well done girls, keep it up, only a few days to go!” 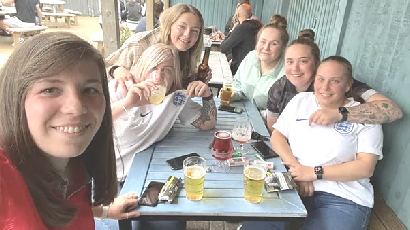