An interview with… TJ Dickens (Wrexham)

Wrexham were the winners of the top of the table clash in Genero Adran North on Sunday, beating Connah’s Quay Nomads 3-2 for a seventh straight league win, to go top of the table.

Midfielder TJ Dickens was a part of that victory on Sunday, as well as the recent impressive run. She described the win against Connah’s Quay as a “brilliant result” and said that, whatever happens in the title race this season, the future is looking very bright for the club:

WSS: A great result for you on Sunday, was the game as good as the scoreline suggests?

TJ: Brilliant result! I think the game was a really good, competitive game between two very good teams. It was one of the best games I've been involved in all season.

WSS: Was it tense or nervous in the later stages of the match or were you always confident of winning?

TJ: Of course, the later stages are always tense with us only being up by one goal. Although I always had the confidence in my team mates to dig deep to see out the win.

WSS: This makes it seven league wins on the trot and takes you top of the league, surely the team's confidence must be sky high right now?

TJ: Team confidence is good at the moment but we are not getting carried away. Our aim is to keep focus on each game as they come for the remainder of the season.

WSS: Does that make it a little frustrating though that you don't have another league game for three weeks?

TJ: It is a little frustrating as we have really good momentum at the minute, a shame not to be able to keep it going. We just need to keep focus on training in the meantime and hopefully our winning streak will continue when we're back.

WSS: Rosie Hughes has been hitting many headlines with her goals this season and she is forming a great partnership with Amber Lightfoot, how big a boost to the team is it to have that kind of firepower up front?

TJ: It's a massive boost to the team, they've both formed a really good partnership and have a real good understanding of how each other plays. It's always good to have goalscorers playing in front of you and they both work really hard for the team.

WSS: As well as yourselves, three other teams still have a realistic chance of finishing on top of the table, do you think it will stay that way for the remainder of the season?

TJ: It's going to be a close one, all we can do is concentrate on winning the games we have left and keeping the pressure on the competition until the end of the season.

WSS: Overall, you have a very young squad at Wrexham, just how bright is the future for the club?

TJ: The future is looking very bright. Each one of the under 19's that have come up have adapted quickly to the ladies game, they've showed that they are more than capable to play at this level. Hopefully it's just the start of a very strong looking future at the club.

WSS: If you were to win the Genero Adran North, what would it mean for the club and for women’s football in the area?

TJ: It'd be a great achievement for the club to win the league. It would also be great to do it for our coaches and supporters too. On the other hand, if it doesn't happen this year, we'd still be very proud of what we've achieved as we've come on leaps and bounds since the start of the season. We'll just have to put our heads down and work for it and make sure it happens next season.

Our thanks to TJ! 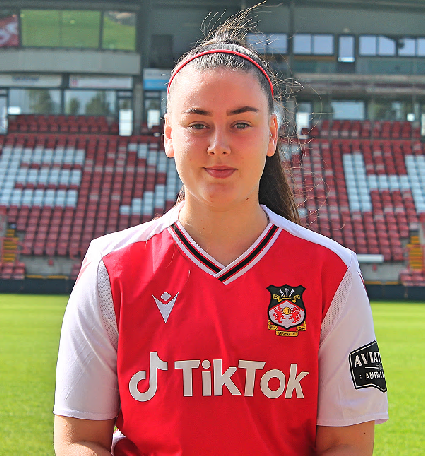