Glasgow City take over at top

Glasgow City took their opportunity to regain the leadership of the Park’s Motor Group SWPL 1 table with a 2-0 victory over Hearts.

After Rangers’ match away to Aberdeen was postponed because of an amber weather warning, top spot was on offer to City with a victory but Hearts were in a determined defensive mood and kept the scoreline goalless at half time, with Charlotte Parker-Smith making a number of saves. The breakthrough came midway through the second half, when substitute Abbi Grant set up Clare Shine to drill home the opening goal and another substitute wrapped up the win with the second goal, Ode Fulutudilu scoring moments after coming on.

Celtic meanwhile kept themselves firmly in touch with the top two by beating Hamilton Academical 3-0. Charlie Wellings got her side off to a great start by giving them the lead in the second minute but it wasn’t until the late stages of the game that they were able to make the points safe. First, an unfortunate own goal from Georgina McTear doubled Celtic’s advantage and three minutes later, Chloe Craig slotted home a cross from Maria Gros to round off the scoring.

Motherwell strengthened their position in the top half of the table with a 3-0 win against Spartans. Playing in soggy conditions, they took the lead after five minutes through a neat finish from London Pollard and the 17-year-old striker scored a second on the stroke of half time. ‘Well secured their fifth win of the season on the hour, Joanne Addie firing home from close range after Spartans were unable to clear a corner.

The top two teams in SWPL 2 came face to face and leaders Dundee Utd will be the happier of the two sides after the match with Glasgow Women finished level at 2-2. Danni McGinley put United in front midway through the first half, with Cara Henderson bringing Glasgow level just after the half hour. Kaitlyn Canavan gave Glasgow the lead for the first time after the break but seven minutes later, Rachel Todd equalised once again to ensure that the spoils were shared. The result means that United maintain their lead of twelve points at the top of the table.

Boroughmuir Thistle remain in third place and have narrowed the gap on Glasgow Women to four points following their 3-2 victory away to Stirling University. Samantha Duncan gave Boroughmuir a first half lead which was cancelled out by Jodie Malcolm, but Courtney McAvoy ensured that Thistle were in front going into the break. Rebecca Robertson brought matters level six minutes after the restart but Shannon Todd put Thistle ahead for a third time in the 64th minute and this time they held on for a hard earned win.

Hibernian went through to the Fourth Round of the SWF Scottish Cup after winning their delayed tie 6-1 away to St Johnstone. Alexa Coyle netted two of the goals for Hibs, with Michaela McAlonie, Shannon McGregor, Rosie Livingstone and Ellis Notley adding the others to seal a home tie with Gartcairn. Montrose meanwhile defeated Livingston on penalties following a 1-1 draw and will play host to Kilmarnock in the last sixteen. 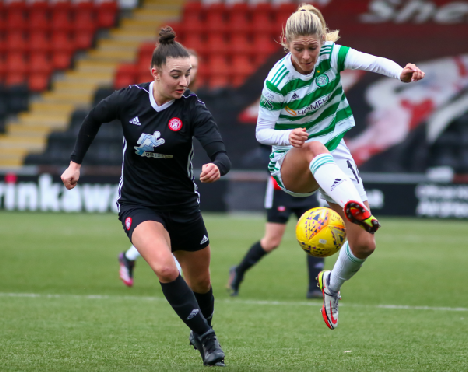