The title race got even tighter after Sunday's results and the top three are now covered by just two points. Derby County remain on top of the table, even though they went down to a 1-0 defeat at the hands of fast improving Burnley FC Women. Hollie Kelsh scored the only goal of the game for the Clarets as they extended their unbeaten league run to six matches and moved up to fourth.

Second met third and the spoils were shared, with Fylde Women and Wolverhampton Wanderers finishing level at 1-1. Beth Merrick gave Wolves the lead midway through the first half, with the Coasters equalising after the break through Emily Hollinshead. Fylde therefore sit one point behind leaders Derby but it is Wolves, who stay unbeaten and have games in hand, who will undoubtedly be the more satisfied of the teams at the result.

The battle to keep out of the bottom three also intensified and, although they picked up a point from a goalless draw with Hull City, Middlesbrough have slipped below the line by a single point.

Two of the other teams in the bottom five met each other and it was Stoke City who picked up three valuable points, thanks to a 2-1 victory over Sheffield FC. Manuela Delle gave Stoke the lead in the second half, before a Callan Barber own goal brought Sheffield back on level terms. Barber was make amends though in style, firing in a free kick to put her side back in front and Stoke held out under late Sheffield pressure for a crucial result which puts an end to a run of four straight league defeats.

Loughborough Lightning meanwhile made it seven points out of nine and are out of the bottom three after edging out Brighouse Town in a nine-goal thriller. Chloe Young netted twice for Loughborough along with Rosetta Taylor, Nicola Russell and Abbie Benstead, whilst Brighouse replied with a goal apiece from Leah Embley, Ella Hartley, Shauna Legge and Monique Watson.

With their title rivals involved on FA Cup duty, Oxford Utd took the opportunity to narrow the gap on leaders Ipswich Town to four points with a 3-1 victory over Portsmouth. Daisy McLachlan and Lauren Haynes put the U's two ahead inside the opening twenty minutes, before Cherelle Khassal reduced the arrears shortly before the break. Beth Lumsden then wrapped up the win for Oxford with the third goal and her fourteenth overall in the league, five minutes from time.

Gillingham continue to have a fine season and they cemented themselves in fourth place by defeating London Bees 2-1. The Bees went into the game in good form but found themselves two behind as Phoebe Leitch and Amy Russ both scored for the Gills, before Jo Wilson grabbed a consolation for the Bees late on.

Crawley Wasps got back to winning ways with a 4-2 success against Keynsham Town. Iesha Swaby netted a brace to put them two ahead but Keynsham came fighting back and goals either side of half time from Henna Butcher and Lauryn Soufland brought them back on level terms. Natasha Stephens restored Crawley's lead seven minutes later and they made the points safe late on as Swaby completed her hat-trick with the fourth goal.

It has been a good week for Cardiff City Ladies and they followed up a midweek victory by beating Chichester & Selsey 3-2. Cori Williams scored twice and Zoe Smith for Cardiff, whilst Philippa Holden and Jane Yeates replied for Chi.

Milton Keynes Dons also picked up an important win, Nicole Pepper scoring the only goal of the game in their 1-0 victory away to Hounslow Women.

Liverpool Feds made a swift return to the top, taking advantage of Newcastle Utd playing in the FA Cup. Paige Cole scored twice, with Erin Slade and Molly Farley adding the other, as the Feds went two points in front with a 4-1 victory against Stockport County, whose consolation came from Jess Battle.

Leeds Utd hold on to third place but have lost a little ground following their 1-1 draw against Chorley. Kathryn Smith was on target for Leeds whilst Chorley, who shared the points for the fifth time in nine matches, scored through Lisa Topping.

Norton & Stockton Ancients are back in the top four after they won 2-1 away to Alnwick Town. Bianca Owens' early strike for Norton was cancelled out on the half hour by Michelle Stewart, but it was Norton to took the points when Sophie Tierney scored a decisive second with ten minutes remaining.

Chester-le-Street Town picked up three valuable points when winning 4-1 at FC United of Manchester. Nichola Havery bagged a brace, along with Katie Ellison and Hope Taylor, to hand the Cestrians their second league win of the season, whilst the home side's consolation was scored by Chelsea Flanagan.

Doncaster Rovers Belles have gone nine points clear at the top following their 4-0 win away to Sporting Khalsa. Jasmine Saxton netted twice to keep up her recent good run of form, with Lily-Mae Wishart and Lauren Breen joining her on the scoresheet.

Boldmere St Michaels meanwhile ran out 3-0 winners at Burton Albion, a result which takes them back into second. Chloe Bickley, Alex Liddiard and Stephanie Weston all scored a goal apiece for the Mikes.

Leek Town meanwhile bounced back to beat Leafield Athletic 2-0 and consolidate themselves in fifth place. After a goalless first half, Katie Maya put Leek in front within two minutes of the restart and Mollie Garner wrapped up the win with the second goal.

Peterborough Utd made it three wins in four matches with a 5-1 success against Bedworth Utd. Jessica Driscoll netted two of the goals for the Posh Women along with Keir Perkins and Cassie Steward, along with an own goal. Jodi Hunter netted a consolation goal for Bedworth.

Hashtag Utd have picked up the pace once again at the top of the table and stretched their lead over Billericay Town to four points with a 4-1 success away to Kent Football Utd. Gemma Baker, Sasha Adamson, Macey Woolcock and Cerys Adams all scored a goal apiece for the Tags, with Hannah Cleary replying.

AFC Wimbledon have moved into third after scoring five times without reply past Cambridge City. Ashlee Hincks led the scoring for the Dons with a hat-trick, and she was joined on the scoresheet by Rebecca Carter and Katie Stanley.

Queen's Park Rangers kept themselves in touch with the top three by winning 1-0 away to Harlow Town. Demi Edwards netted the only goal of the game for Rangers after fourteen minutes.

Norwich City meanwhile gave their hopes of climbing out of the bottom four a big boost, thanks to a 2-1 victory at Enfield Town. Megan Todd and Freya Symonds were on target for the Canaries, whilst Che Thomas responded for Enfield.

Cheltenham Town preserved their eight point lead at the top with a 4-1 victory against Maidenhead Utd. All of the goals came in the second half, Lacy-Jai Liggett netting a double along with Georgie-Marie Barbour-Gresham and Mai Butler, but the leaders saw their run of five successive clean sheets brought to an end by Simone O'Brien.

AFC Bournemouth meanwhile defeated Larkhall Athletic 2-0 to keep up the chase in second place. The Cherries took a seventh minute lead through Jade Bradley and Lucy Cooper added the second after the hour mark.

Chesham Utd completed a good week for themselves with a 1-0 win against Portishead Town, which leaves them in fourth place. Gemma Fraser settled the game with the only goal during the first half.

In Division One North, third placed Leeds Utd were 3-2 winners away to Barnsley. Ruby Jex-Oldfield and Emily Pierrepont put Barnsley two up in the first half but after the break, Leeds came storming back to take the points with goals from Sarah Dobby, Katie Ramsden and Bridie Hannon. Jordan Atkinson scored a hat-trick along with Lily Crosthwaite, Jennifer Knowles and Amy Richardson as Durham Cestria won 6-2 against Norton & Stockton Ancients, whose replies came from Bianca Owens and Lily Patrick. Charlotte Evans and Emma Hickson netted the goals as Chorley won 2-1 at Stockport County.

Keynsham Town booked their place in the semi finals of the League Plate with a 2-0 victory against Portsmouth. Amber Coates and Gracie Reed scored a goal apiece for Keynsham, who will be at home to Watford in the last four.

Middlesbrough have moved back into second place in the Northern Division following their 3-1 victory over Bradford City. Stockport County also made up ground as Megan Bradley, Madi Hudson, Ellie Richardson and an own goal gave them a 4-1 win against Durham Cestria. Imogen Porteous-Williams was on target five times and Arianne Parnham added the other for Brighouse Town as they beat Leeds Utd 6-3 and Hull City were 4-1 winners over Barnsley thanks to Katie Hardy, Olivia Sellars, Mary Lisle and Jennifer Randall.

Midland Division leaders Wolverhampton Wanderers were held to a 3-3 draw by Leicester City. Lowri Walker, Beth Grady and Daisy Wickett all scored for Wolves, with Leicester responding through a Dulcibella Binns double and Tara Kirk. Wolves' lead has been trimmed to eight points by Nottingham Forest, who won 5-0 at Solihull Moors thanks to Jessica Waplington (2), Amy Colledge, Cameron Farthing and Arryana Daniels. West Bromwich Albion went one better with a six-goal haul against Doncaster Rovers Belles, Rameyah Farquharson and Annabel Sims each netting twice along with Holly Beck-Esson and Jessica Hood. Loughborough Lightning went down to a 2-1 defeat at the hands of Sporting Khalsa and Stoke City defeated Bedworth Utd 4-1 with strikes from Ava Suckley (2), Polly Barrow and Lauren Wilshaw.

Just a single point now covers the top four in the South East Division, still headed by Hashtag Utd who did not have a game. West Ham Utd are second after a Rebecca Chitolie hat-trick and Jessica Collyer gave them a 4-1 victory over Cambridge Utd which leaves them one point adrift, as are Milton Keynes Dons who edged out Norwich City 5-4 thanks to Renai Bennett, Mathilda Brown, Molly Green, Florence Matthews and Holly Tyrrell. A win would have taken Watford top but they were beaten 1-0 by Stevenage Women whose markswoman was Emily Schofield.

Second met third in the South Central Division and the points were shared as London Bees and Crystal Palace finished level at 3-3. AFC Wimbledon meanwhile won 1-0 at Enfield Town courtesy of a solitary strike from Gloria Siber.

Southampton FC Women have gone even further clear in the South West Division, extending their lead to a whopping fifteen points after Emilie Castagna, Hannah Jeffrey and Kaylee Buckingham gave them a 3-0 victory away to Lewes. 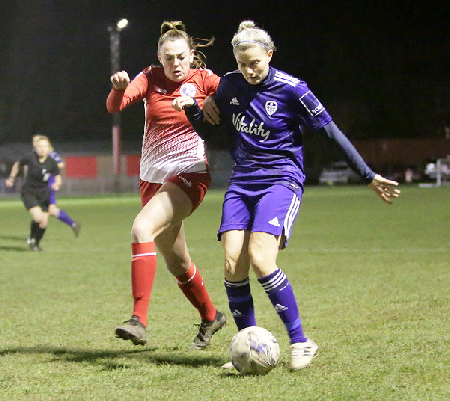