Southampton FC Women are one of three FA Women's National League teams still remaining in the Vitality Women's FA Cup, and they reached the last sixteen with a 1-0 extra time victory over FA Women's Championship side Bristol City.

In front of an attendance of 3,638 at the St Mary's Stadium, Ella Morris scored the only goal of the game in the opening minute of extra time to take the Saints into the Fifth Round for the first time (see match report).

The draw has guaranteed that at least one FAWNL side will be the quarter finals, for Southampton have been paired with Ipswich Town, who have been title rivals throughout the season. The Tractor Girls made it through to the last sixteen for the second time in three seasons, thanks to a 1-0 victory away to Newcastle Utd. Lucy O' Brien has been in good form in recent weeks and her third minute goal proved to be enough to give Ipswich the win against a plucky Magpies side.

West Bromwich Albion are the other side from outside the top two flights in the Fifth Round, as they came through a penalty shootout against Exeter City. The Devon side have had a magnificent season to date in Cup competitions but a well contested tie was to end goalless and Albion triumphed 4-2 from the spot.

Albion will be at home again in the next round, to Coventry Utd who also triumphed on penalties following a 1-1 draw against Billericay Town. The game was goalless at ninety minutes, with Coventry taking the lead during extra time thanks to Katie Wilkinson. Billericay hit back and Lucy Jones slotted home a penalty with four minutes remaining to take the game into the shootout, where Jay Bradford's side won 4-2 with Natalie Haigh scoring the winning kick.

Chelsea's defence of the trophy began on Saturday with a 3-1 victory away to Aston Villa. Guro Reiten gave Chelsea an eighteenth minute lead and Pernille Harder doubled their lead from the penalty spot on the half hour. Reiten secured the win with her second goal after the break, before Villa grabbed an injury time consolation through Ramona Petzelberger.

Chelsea will be at home in the last sixteen, to Leicester City who progressed with a stunning 3-1 success at Tottenham Hotspur. Angela Addison put Spurs in front on the hour mark and they looked to be on their way to victory until Shannon O'Brien sent the game into extra time when she equalised with eight minutes remaining. Sophie Howard then put Leicester in front within a minute of the restart and Esmee de Graaf struck late on to seal one of the best results of the day for her side.

Manchester Utd safely negotiated their trip to Bridgwater Utd with a 2-0 victory in front of a sellout crowd at Fairfax Park. Hayley Ladd opened the scoring in the seventeenth minute but Bridgwater kept themselves in the game until eight minutes from time, when Ella Toone added the second goal.

This result has set up the most eyecatching tie of the Fifth Round, with United having been drawn at home to Manchester City, who started the Fourth Round off on Saturday with an eight-goal victory over Nottingham Forest at the City Ground. The tie attracted an attendance of 3,994 but in-form City never looked back after taking a second minute lead through Caroline Weir. Georgia Stanway led the scoring with a hat-trick, Khadija Shaw weighed in with a double and they were joined on the scoresheet by Filippa Angeldahl and Lauren Hemp.

Arguably the game of the day was at Brighton & Hove Albion where visitors Reading FC Women went through with a 3-2 victory. Reading went two ahead with goals either side of half time from Justine Vanhaevermaet and Deanne Rose, before Brighton hit back to level the scores thanks to Emma Koivisto and Kayleigh Green. Tia Primmer then settled matters in favour of Kelly Chambers' in-form side with seven minutes remaining.

Reading face another intriguing tie in the Fifth Round against West Ham Utd, who ran out 4-1 winners away to Sheffield Utd. Melisa Filis gave the Hammers a fourth minute lead which was quickly cancelled out by Rebecca Rayner, but Claudia Walker ensured that West Ham were back in front by half time. Walker then scored her second after the break and Dagny Brynjarsdottir completed the scoring just after the hour.

Liverpool have been in rampant form in the league in recent months and took this into the FA Cup as they defeated Lincoln City 6-0. Matt Beard's side scored three times in the five minute spell leading up to half time, Leighanne Robe netting twice and Katie Stengel adding the other. After the break, Meikayla Moore extended Liverpool's lead before Robe completed her hat-trick from the penalty spot on the hour and Charlotte Wardlaw rounded off the scoring.

Liverpool have landed a plum draw in the last sixteen at home to Arsenal who were made to work hard for their victory by a battling London City Lionesses side who defended in determined fashion as the Gunners won 1-0. Vivianne Miedema settled the game with its only goal, scored a minute before half time.

Durham Women have a good record in the Cup in recent years and they are in the last sixteen once again following their 3-1 victory over Blackburn Rovers. All of the Wildcats' goals came in the first half, Beth Hepple giving them the lead before they added further goals through Elizabeta Ejupi and Sarah McFadden. Annabel Blanchard scored a spectacular goal on the hour to pull one back for Blackburn but Durham saw the game through from that point.

Birmingham City who were also pushed hard by a Championship side, beating Sunderland 2-1 after extra time. The Blues took a first half lead through Veatriki Sarri but were taken to the extra period when Keira Ramshaw equalised with four minutes remaining. Lucy Whipp put Birmingham back in front in the 100th minute and this time they were able to safely negotiate the remainder of the tie to book their place in the next round.

Charlton Athletic produced a clinical second half performance to win 6-0 against Plymouth Argyle at Home Park. The first half was goalless but it was the Addicks who took the lead on the hour thanks to Bethan Roe. Jorja Fox and Lois Roche then added goals in quick succession, before Charlton went on to seal the victory with further late strikes from Katie Robinson, Vyan Sampson and Mia Ross.

Charlton's reward will be a home tie against Everton in what will be a repeat of the 2005 Final. The Toffees also travelled to FAWNL opponents and in front of a four-figure attendance, booked their place in the last sixteen with a 4-0 victory over Huddersfield Town. Anna Anvegard opened the scoring after four minutes and Valerie Gauvin then added a goal either side of half time. Claire Emslie rounded off the victory with the fourth goal late on. 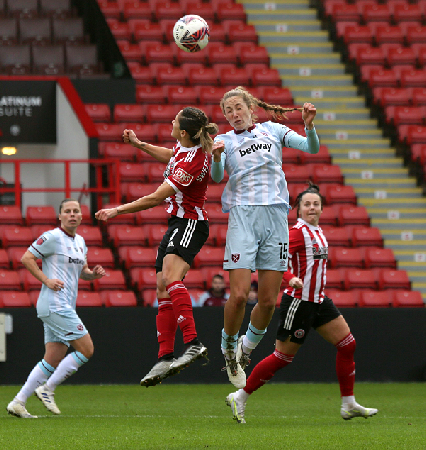