Southampton FC Women, of the FAWNL Southern Premier Division, claimed a notable victory over Championship Bristol City in front of close to 4,000 spectators at St Mary's Stadium in a Fourth Round Vitality Women's FA Cup tie.

It was a win born out of tenacious determination, some good fortune and a couple of moments of brilliance which determined a closely fought contest.

Southampton had a couple of dangerous early attacks expertly shut down by Satara Murray but the visitors soon established control over proceedings moving the ball well through midfield and attacking on both flanks. The Saints defence was solid however and behind them goalkeeper Kayla Rendell was in commanding form throughout.

Melissa Johnson saw an early header from a corner bounce off the top of the bar whilst Abi Harrison had an effort held by Rendell on 35 minutes. Saints were limited to occasional through balls with Fran Bentley in the City goal very quick off her line to clear the danger.

The second period started dramatically with Gwennan Dayies hitting the Saints post from close range, then Rendell making a fine blocking save as Johnson got clear of the defence on 49 minutes.

Saints regrouped after those early scares and returned to absorbing Bristol pressure whilst trying to hit on the counter. A flurry of substitutions seemed to give the home side a lift and Lucia Kendall nearly fashioned a brilliant opener on 78 minutes improvising a first time effort just wide with Bentley stranded.

City were inches away from an injury time winner as Aggie Beever-Jones poked a through ball past Rendell but substitute Milly Mott got back superbly to somehow hook the ball away off the line for a corner.

The value of Mott's intervention was doubled within seconds of the start of extra time when Ella Morris gave Saints the lead. A left wing cross was flicked on by Katie Rood and Morris controlled before finishing right footed low past Bentley.

Southampton grew in confidence and Kendall nearly added a second but the Championship team were far from done. With 109 minutes gone, they were awarded a penalty but, after a lengthy delay for a Southampton injury in the area, Jesse Woolley fired the spot kick over the bar. With a couple of late half chances going wide of goal and some superbly resolute Saints defending, the majority of the crowd were able to celebrate a fine victory after four added minutes at the end of extra time.

Southampton FC Women have risen rapidly through the pyramid helped by the backing of the men's Premier League club and are challenging for promotion to the level which Bristol City operate at. However, they must also relish the possibilities offered by the Fifth Round draw after this hard earned success. 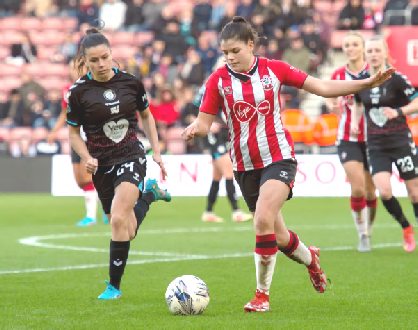 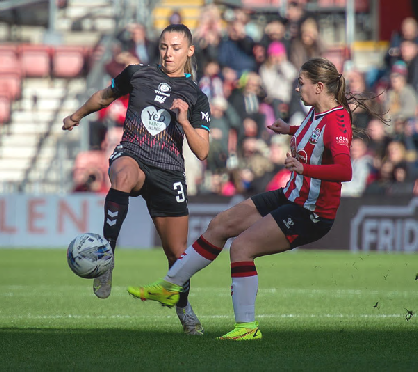 Bristol City full back Lia Cataldo gets in a 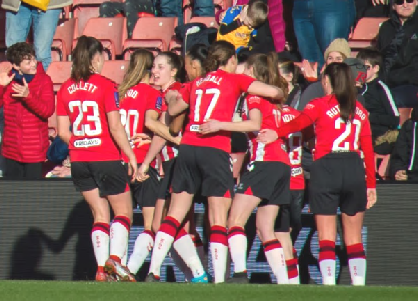