The Women’s Football Player Performance Pathway is a collaboration between BTC and Bridgwater United FC which aims to give talented sportswomen the opportunity to develop their skills alongside their academic studies.  When BUFC were drawn against Manchester United in the Fourth Round of the Vitality Women’s FA Cup, three BTC Pathways students were selected for the team; Ellie-Mae Bell, Jenna Markham and Tia Asker.

Former Huish Episcopi Academy student and midfielder Ellie-Mae (18) of Langport was brought on for the last twenty minutes of the game, when the score still stood at 1-0.  She said: “It was a brilliant experience. It was a very different type of game from what I’m used to, but it was such a good opportunity.

“The Manchester team are at a much higher professional level than us as students, but it’s where we all aspire to be, so it was a really good game to be involved in. Even though we lost, it was very inspiring to think that we could be like that one day. It doesn’t feel unrealistic now that we could get there in the future if we work hard and keep training.”

Rob Liddiard coaches the Bridgwater United first team as well as students on the women’s football pathway.  He was sitting on the bench during the match and saw Ellie-Mae and Jenna called into play.  He said: “The BTC ladies did really well.  They were playing against some of the world’s best at just 17 and 18 years old.

“To be thrust into that sort of game with no notice and to do so well is something to be really proud of. They did a great job. They led by example and got the time that they deserved. It just shows the success of our Women’s Football Player Pathway and how it’s developing players of a really high standard.”

The BTC and Bridgwater United Women’s Football Player Pathway is one of a number of successful development opportunities available to sportsmen and women at the College. BTC Assistant Principal Jason Gunningham commented: “Alongside football, the College’s sport performance pathways also include rugby Regional Development and College Academy programmes with Bristol Bears and a Regional Talent Development Centre with Team Bath Netball.

“Supporting our students in both their academic and sporting ambitions is at the very heart of all these programmes.  The clubs we work with offer a genuine platform for our students to showcase their talents, and I am very excited to see the next generation of athlete scholars progressing with their respective clubs while simultaneously achieving the excellent academic grades, qualifications and skills needed to take into other future career opportunities.”

The BTC and Bridgwater United Women’s Football Player Pathway is offered to students on any course who are already part of Team BTC, the nationally-recognised sports academy programme.  If you’d like to know more about this and other Sport courses and opportunities available at BTC, visit www.btc.ac.uk. 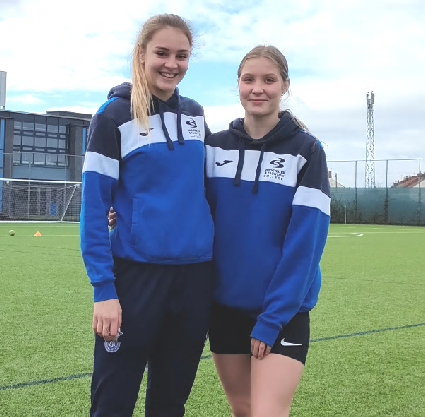