Liverpool Feds produced an impressive result on Sunday when they won 2-0 away to Northern Premier Division high fliers Fylde Women in the quarter finals. The first half was goalless but Chantelle Thompson opened the scoring for the Feds after the break and Paige Cole sealed the win in injury time.

Oxford Utd were another team to see their hopes of a possible League and Cup double brought to an end after they were beaten 1-0 by Crawley Wasps. Natasha Stephens scored the goal which took Crawley into the semi finals, four minutes into the second half.

Southampton FC Women still remain in the running though, booking their place in the last four with a hard earned 1-0 victory over Hashtag Utd, courtesy of a late winning goal from substitute Katie Rood.

Nottingham Forest are through to the semi finals following a hard fought 1-0 success at Alnwick Town. Charlotte Steggles settled matters with the only goal of the game, midway through the second half.

Forest are the only top flight team remaining in the competition after Portsmouth went out to AFC Wimbledon on a penalty shootout, following a 3-3 draw. Shannon Albuery scored twice and Anaisa Harney the other for Pompey, whilst Ashlee Hincks, Emily Donovan and Rosie Russell were on target for Wimbledon who went on to triumph 7-6 from the spot.

Cheltenham Town's superb run of recent form is showing no signs of slowing and they are into their first major cup semi final after beating Exeter City 2-1. Stephanie Beck did give Exeter a third minute lead but goals either side of half time from Lacy-Jai Liggett turned the match in Cheltenham's favour.

Sporting Khalsa have also reached their first major semi final after they won 3-1 away to Leafield Athletic after extra time. Chloe Handy gave Khalsa an early lead which was cancelled out by Daisy-Mai Clements midway through the second half but in the extra period, Handy put Khalsa back in front with her second goal and Angelique Morley wrapped up the win with three minutes remaining.

Wolverhampton Wanderers have recaptured the leadership following their 5-0 victory away to Hull City in the only match to be played in the division. Anna Price and Amber Hughes put Wolves two ahead inside the opening fifteen minutes and after the break, Maz Gauntlett made it three before Amy Dicken and Hughes rounded off the scoring late on.

Leaders Ipswich Town shared a goalless draw for the second match in a row when they took on Milton Keynes Dons on Sunday. The result means that the Tractor Girls head the table by five points, although chasing sides Oxford Utd and Southampton FC Women both have games in hand, whilst the Dons picked up an important point in their quest to climb out of the bottom four.

There was another 0-0 draw in the division on Sunday, at Bridgwater Utd as they shared the points with Gillingham. The Gills therefore stay in fourth place whilst Bridgwater have dropped back a place to sixth.

This is because London Bees have moved above them after they defeated Cardiff City Ladies 5-1. The South Wales side went into the game having won their two previous matches but Jo Wilson, Danielle Puddefoot, Flo Gamby, Chiara Lape and an own goal got the Bees back to winning ways, Cardiff's consolation coming from Cori Williams.

Chichester & Selsey meanwhile picked up an important 2-1 victory against Plymouth Argyle. Sophie Phelps gave Chichester the lead just before half time and an own goal gave them the points, despite Natasha Knapman pulling a goal back for Argyle.

The leadership changed hands once again with Newcastle Utd returning to top spot after their 2-1 success away to Durham Cestria. Katie Barker and Kacie Elson scored the goals for Newcastle, with Grace Ayre replying.

Chester-le-Street Town and Bradford City met in an important clash at the other end of the table and finished level at 2-2, keeping the Cestrians three points ahead of their opponents. Katie Ellison and Nichole Havery both scored for Chester-le-Street, whilst Bradford's goals came from Katy Woodcock and Charlotte Stuart.

Boldmere St Michaels continue to close the gap on leaders Doncaster Rovers Belles and are now three points off the pace after they defeated Wem Town 3-0. Stephanie Weston, Jessica Lundie and Philippa Wilson scored the goals for the Mikes.

Long Eaton Utd stay in third but lost ground as they went down to a 1-0 defeat at the hands of Bedworth Utd. Charlotte Taylor scored the only goal of the game to earn Bedworth their second league win of the campaign.

Lincoln City were unable to build on their midweek victory over Doncaster Rovers Belles, going down 4-2 to Solihull Moors. Zoe Creaney, Annie Highway, Tiana Russell-Cartwright and Leah Seivwright were all on target for the Moors, with Jessica Rousseau netting twice in reply.

Whilst Hashtag Utd were on League Cup duty, Billericay Town took the opportunity to close the gap on them to a single point with a 1-0 victory away to Stevenage Women. Ellie Jeffkins scored the game's only goal to help step up her team's title challenge.

Actonians Ladies meanwhile regained third position as they won 2-1 at Harlow Town. Therese Addison gave Harlow a great start by giving them a ninth minute lead but Actonians, who have had a fine season to date, levelled the scores through Mizuki Hirakuni and Sharon Odofin scored the winning goal, midway through the second half.

Cambridge Utd are back in the top half following their 3-1 victory away to Kent Football Utd. Ruth Fox, Alysha Stojko-Down and Nicole Emmings were all on target for the U's whilst Kent's consolation came from Suaila Cardoso Queni.

Another week, another draw for London Seaward! The mid-table side have proved themselves to be hard to beat over the campaign but last Sunday's goalless meeting with Cambridge City - who are one place below them - was the eighth time they have shared the points over the course of the campaign.

AFC Bournemouth have reduced the gap on leaders Cheltenham Town to five points after running out 8-2 winners over Portishead Town. Becki Bath hit a hat-trick for the Cherries, whose other goals came via a Lucy Cooper double, Katie James, Katie Kingshott and Helen Corbin, whilst the Somerset side's replies came from Nathalie Zajaczkowski and Amy Clark.

Southampton Women are not giving up the fight in third, recovering from an early setback to win 5-1 away to Larkhall Athletic. Jessie Wills fired the Larks into a fourth minute lead but Kellie Warren quickly brought Southampton back on level terms and Laura Vokes put them ahead on the stroke of half time. Lauren Cheshire increased their lead from the penalty spot after the break and they went on to add late goals from Sian Wylie and a powerful header by Chloe Tucker.

Three second half goals took Chesham Utd to a 3-0 victory over Swindon Town, which sees them keep pace with Southampton. Gemma Fraser opened the scoring just before the hour and after Kate Bowers added the second, Fraser rounded off the scoring with her second late on.

Maidenhead Utd consolidated themselves in the top half by scoring five times without reply away to Poole Town. Nicole Barrett led the scoring with a hat-trick and she was joined on the scoresheet by Simone O'Brien and Amy Saunders.

Chorley have taken over at the top of the Northern Division after they defeated Middlesbrough 4-0. Grace Foy (2), Chloe Drury and Grace Mills scored the goals which take the Magpies above previous leaders Huddersfield Town, who did not play. Stockport County are now third, they won 8-1 at Barnsley thanks to a five-goal haul from Megan Bradley and others from Georgia Johnson, Ellie Richardson and Lucy Unwin, whilst Liverpool Feds were 2-1 winners over Hull City.

West Ham Utd are the new leaders of the South East Division following their 6-0 win against Norwich City, Latifa Mammeri netting twice along with T'yana Nee-Chambers, Aminata Lewis, Misha Clarke and Libby Skinner. The Hammers head the table on goal difference from Milton Keynes Dons who won 2-1 at Cambridge Utd. Hashtag Utd had started the day on top of the table but are back in third; despite goals from Millie Langley and Ruby Kilden they drew 2-2 with Stevenage Women whose replies came from Louise Godden and Ciara Purdue.

South Central Division leaders Charlton Athletic did not play and their advantage has been halved to three points by Crystal Palace who scored nine without reply against London Seaward. Ella-Mai Coutts scored four times for Palace with Alex Hayman (2), Rosa Tims (2) and Alexandre-Sarah Bokotshi adding the others. Charlotte Flood gave AFC Wimbledon a 1-0 victory over Billericay Town and Enfield Town defeated London Bees 5-1, Sian Bah hitting a hat-trick along with Macy Diaz and Klesha Darroux.

Bridgwater Utd became the first side to take points off leaders Southampton FC Women in the South West Division when they shared a 1-1 draw, Megan Collett scoring for the Saints. Chenille Smith scored the only goal as London City Lionesses went second after beating Keynsham Town 1-0 and Oxford Utd were 3-0 victors at Portsmouth, courtesy of a goal apiece from Jennifer Hughes, Holly Sellwood and Gemma Sims. 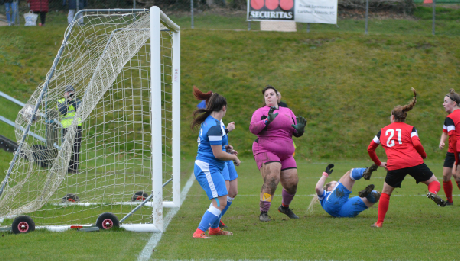