Rangers have the advantage in the SWPL 1 title race after they won 3-1 against Glasgow City in the top of the table clash on Sunday. Both teams went into the game with an unbeaten record and it was Rangers who went two ahead at he break thanks to Lizzie Arnot and a Niamh Farrelly own goal. Jane Ross put the seal on the game with the third, before City grabbed a late consolation through Clare Shine.

This means that Rangers lead the table by two points and have a game in hand, whilst Celtic are two further points adrift in third following their 2-0 victory at Spartans. Maria Gros opened the scoring for Celtic in the first half, with Clarissa Larisey adding the second just after the hour.

Hibernian returned to league action with a defeat, beaten 1-0 by Aberdeen who moved themselves closer towards mid-table security. Eva Thomson scored the only goal of the game for the Dons with a powerful 20-yard strike, with eight minutes on the clock.

Hearts were another team to pick up three valuable points, courtesy of a 1-0 success against Motherwell. Erin Rennie was on target for Hearts, fifteen minutes from time, for a result which moves them out of the bottom three places.

Partick Thistle stay second from bottom but did their survival hopes some good by winning 1-0 away to Hamilton Academical who are falling behind the others. With twelve minutes remaining, Clare Docherty scored the only goal to earn Thistle their third league win of the season.

In midweek, Rangers kept up the pace at the top with a 4-0 victory against Hamilton Academical. Kayla McCoy netted twice and Zoe Ness added the other as Rangers went three up during the first half, and Kirsty Howat completed the scoring after the break.

Glasgow City and Celtic met each other on Thursday night and it was City who emerged as 2-0 winners to keep themselves two points behind Rangers. Ole Fulutudilu and Tyler Dodds scored the goals to get their side back to winning ways and put a huge dent in Celtic’s title hopes.

The top two in SWPL 2 did not play on Sunday and Boroughmuir Thistle consoidated themselves in third place with a 1-0 victory against Kilmarnock. Shannon Todd settled matters with the only goal of the game for Boroughmuir, just after the half hour mark.

St Johnstone meanwhile battled out a 1-1 draw with Stirling University, who remain at the foot of the table. A win would have seen Stirling go up a place but despite taking a first half lead through Emma Lyons, they were pegged back when Leia Glading eqaulised for St Johnstone, fifteen minutes from time. 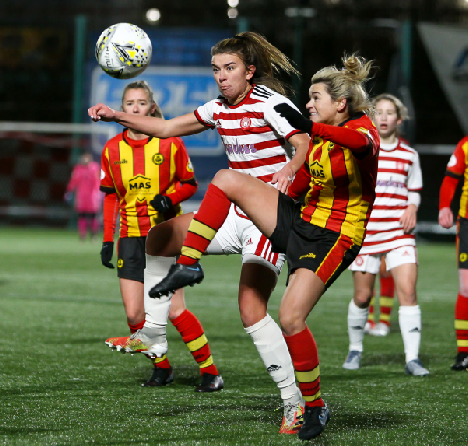 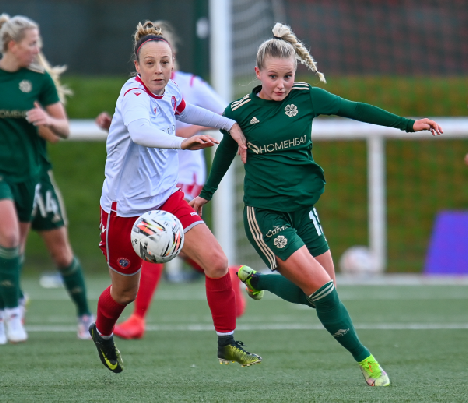