Badshot Lea clinched the Thames Valley Counties League Division One title with four matches to spare and maintained their perfect league record in an afternoon of celebration at their Wrecclesham home ground.

However, they were made to work extremely hard for the three points needed to seal the deal by a defiant Mortimer team who made light of their lowly position in the table to frustrate the champions elect at every turn. It took a late penalty to end the Berkshire team's resistance which was threatening to keep the Badshot champagne on ice.

A strong gusty breeze blowing end to end caused both sets of players difficulty and led to a scrappy encounter, especially in the opening half. Mortimer, playing against the wind, were resolute in defence and the hosts barely threatened Kat Brown's goal until right on the break. Indeed it was Mortimer who had the first two efforts on target well dealt with by Jordan Thompson.

The opening twenty minutes of the second half were largely similar with Badshot struggling to put together any sort of fluent attacking threat and Mortimer challenging for every loose ball with real intent. However, the hosts gradually started to ramp up the pressure as their talented forwards began to find their form.

Brown saved well from Becky Munro and then Nicola Moore. who otherwise had a fine game, shot high and wide when clear twelve yards out, the first time that the Mortimer defence had been opened up in 70 minutes.

Encouraged by this, the home team pushed on urgently and finally the break through came on 79 minutes. A quick through pass saw a last ditch tackle penalised by a penalty and a hotly disputed red card for the Mortimer defender. After some delay Moore stepped up to convert the crucial spot kick.

Apart from a late corner well defended, Badshot were able to see out the match with style and twice nearly added to their lead to make the title safe. As it was, the final whistle saw joyous scenes as their 12th victory in a row made Badshot uncatchable.

Mortimer. who had their own Division Two title celebrations last season, will look to replicate the fine battling display in their remaining fixtures. With their excellent facilities and good support, Badshot Lea will surely continue to thrive after this outstanding season is completed.

Chloe Griffiths under pressure from 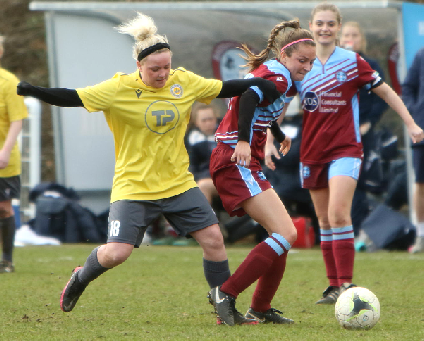 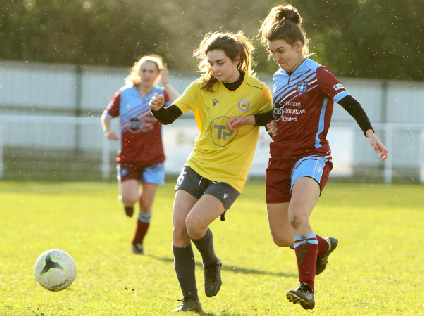 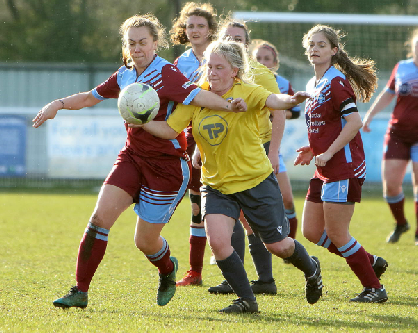 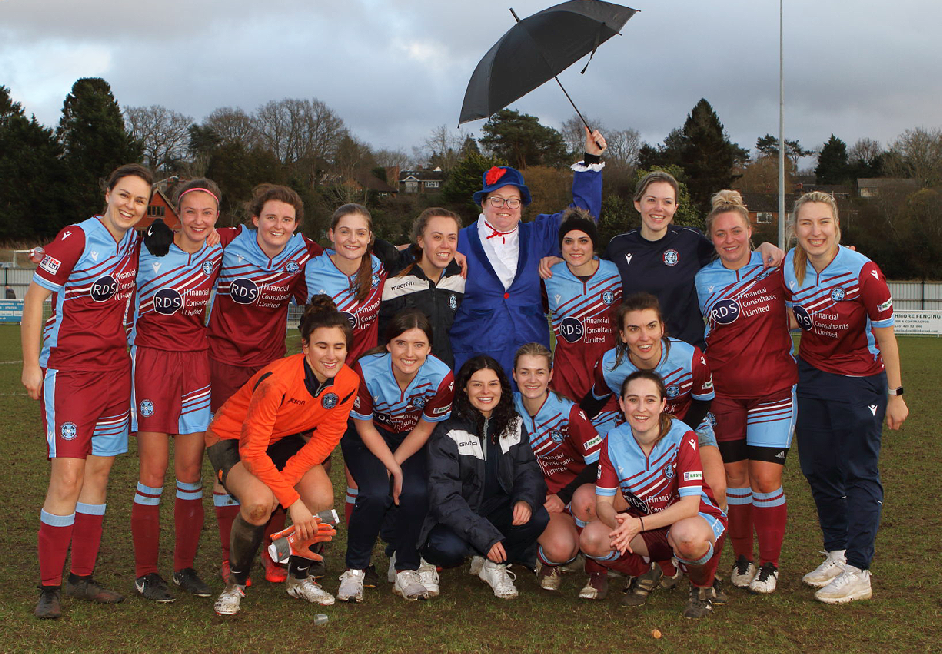