Sporting Khalsa have reached a major Cup semi final for the first time in their history, following their 3-1 extra time victory over Leafield Athletic in the quarter finals of the FAWNL League Plate.

Khalsa striker Chloe Handy scored two of the goals in her side’s victory over Leafield and she told Women’s Soccer Scene that the match was an ‘intense’ and even contest, and that she is quietly confident of her team’s chances of reaching the Final:

WSS: Congratulations on the win on Sunday, was the game as close and tense as the scoreline suggests?

CH: Thank you, yes it was a very intense game, especially for the first 90 minutes. It was very much an even contest. But in the end, we were more clinical and took our chances well. Once we got the second goal in extra time, we were able to take control of the game and push on to secure our place in the semi finals.

WSS: When the game went to extra time, did you think that the team which scored first was likely to go on and win the game?

CH: Yes, scoring the first goal in extra time is always crucial as it gives you the momentum to go on and win the game. Personally, I felt that as soon as the second goal went in during extra time they backed off, which gave us the desire to go and push for the third goal to finish the game off.

WSS: What was the moment like when Angelique Morley scored the third goal late on?

CH: It was a great moment for us in the game as it took all the pressure off us as a team as we knew they would need to score at least two goals to take it to penalties. We knew after that goal we had the advantage and took control of the game. To top it off it was a class goal from Angie and I am delighted for her to be on the scoresheet, straight back after injury.

WSS: Into the semi finals now! You've received a home draw against AFC Wimbledon, what are your thoughts on that draw?

CH: We are excited by the draw especially being at home as it is a tough place for teams to come to. As for AFC Wimbledon, we have never played them before, but we are aware of their capabilities as they have beaten some top teams this season. It will be a tough game for us, but we definitely have the ability to get through to the final of the competition.

WSS: Back to the league again this week and once again you are away to Leafield. Do you think last Sunday's result will have any bearing on that game?

CH: I think that Leafield will be very eager to prove a point in this week’s game as they would not like to lose twice in a row to us. Leafield are a difficult team to play against, however after last week’s performance it will give us confidence to go out and get the three points that we need to go and push on in the league.

WSS: Your next three league games are all away from home but against teams below you in the table, do you see this as an opportunity to push on and look for a top half place?

CH: Yes definitely, February is an important month for us both in cup runs and the league. We are aware of the league table situation as it is very close at the bottom. However, as a team we are 100% focused and looking to push on towards the top half of the table.

WSS: How big an achievement would that be for Sporting Khalsa if you were able to do so, especially when looking at the names of other teams in the division?

CH: It would be a great achievement for us to finish as high possible in the league, considering how poorly we started the season. As said previously, our target is to finish in the top half of the table, and I believe we have the capability to do so. We are all working hard to widen the gap from the bottom three of the table and winning our next three games against teams’ lower teams are pivotal to our targets this season.

WSS: Doncaster Rovers Belles and Boldmere St Michaels have pulled away from the others at the top recently, can you see the title going to one of those two or can another team make a late challenge?

CH: I believe that it will most likely be out of Donny Belles and Boldmere to win the title. Both teams have strong squads and have been performing well. From playing both of those teams I think Donny Belles have the edge, but at the moment it is too close to call. I think the other teams that are just below have dropped too many points as of late to be in contention for the title.

Our thanks to Chloe! 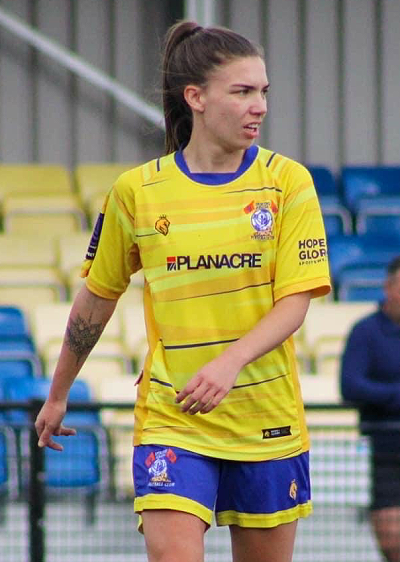