Celtic booked their place in the quarter finals of the SWF Scottish Women’s Cup with a 2-1 win against Rangers, ending their Old Firm rivals’ hopes of a league and cup double in the process.

Clarissa Larisey put Celtic in front during the first half, with Demi Vance heading Rangers level on the stroke of half time. Chloe Craig restored Celtic’s lead with sixteen minutes remaining and this time they held on for the win.

In the quarter finals, Celtic will be away to Aberdeen who made it through by beating Spartans 4-2. Donna Paterson gave Aberdeen a sixth minute lead but Spartans hit back strongly with goals from Kat Smart and Rebecca Galbraith. Francesca Ogilvie brought the scores level again on the half hour and the game remained tightly contested and in the balance until late on, when Eilidh Shore put the Dons back in front and Bayley Hutchison sealed the win in injury time.

Glasgow City ended the hopes of Hamilton Academical by scoring six times without reply. Priscilla Chinchilla gave City an eighteenth minute lead, with Kerry Beattie adding a second soon afterwards. Jenna Clark made it three after the break and Lauren Davidson further increased their lead, before Beattie netted her second and Tyler Dodds completed the scoring.

City will have to wait a little longer to discover who their opponents in the last eight will be, as they have been drawn away to the winners of the postponed tie between Stirling University and Falkirk, which is due to be played on 8th March.

Gartcairn have had a fine Cup run but it was brought to an end on Sunday by Hibernian who scored twelve times against them. Amy Gallacher and Michaela McAlonie led the scoring for Hibs as they each scored a hat-trick and Colette Cavanagh weighed in with a brace. Shannon McGregor, Kirsty Morrison, Toni Malone and Leah Eddie also got on the scoresheet for the former winners as they reached the last eight once again.

Hibs will be on their travels in the quarter finals, to Partick Thistle who were 2-1 extra time winners over Boroughmuir Thistle. In the battle of the two Thistles, Cara McBrearty gave Partick the lead just after the hour mark but Boroughmuir battled back well and Shannon Todd grabbed an equaliser to take the match into the extra period. Rebecca McGowan put Partick back in front with seven minutes left and Brian Graham’s side held out for a hard earned victory.

Hearts came through a tricky tie against SWPL 2 leaders Dundee Utd with a 2-1 victory. Erin Rennie gave Hearts the lead just before half time and after McLaren equalised for United following the break, a superb solo goal from Jenny Smith with fifteen minutes remaining gave Hearts the win.

Hearts will now be at home to Kilmarnock, the only side from outside the top flight through to the last eight so far, following their 2-0 success away to Montrose. The home side battled well throughout the game but it was Killie who took an early lead through Lisa Swanson and Mhairi Crooks scored the second just ahead of the hour mark. 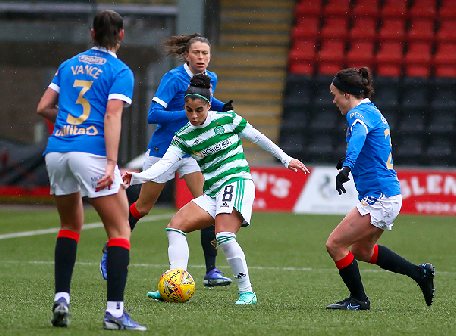