Chesham United have had a very good season to date in a highly competitive FAWNL Division One South West and Sunday’s 2-0 victory against Poole Town, their fourth in a row, has taken them up to third place in the table.

Defender Stacie Blackburn has been one of the mainstays for Chesham this season and she praised the team for their recent form and said that the team’s aim is a top three place and to try and win the County Cup, in which they will play in the semi finals on Sunday:

WSS: Well done on your win on Sunday, was it a case of having to stay patient before the opening goal came?

SB: Thank you, yes we knew that Poole Town would be a tough contest and that they would remain resilient until the end. We just kept playing our game and we knew that if we did that, we would be successful. We had a lot of chances in the first half which gave us the confidence to keep going, we just needed to ensure those chances were converted in the second half.

WSS: That makes it four victories in a row and three successive clean sheets, how high is the team's confidence right now?

SB: It is great for our team to be on this winning streak and have three clean sheets going into a cup semi final. We haven't necessarily been as clinical as we would have hoped recently which makes clean sheets even more crucial.

WSS: The win against Poole takes you back up to third place in the table, is the team doing as well as anticipated or have you exceeded your expectations at the start of the season?

SB: At the start of the season we had quite a few changes, both with players and coaches so it took a little while for these players to find their feet and for us to gel as a team. A lot of these players are young and so this is their first time competing at this level, each week we can see them growing in confidence and gaining valuable experience. With this in mind, our expectations were altered slightly. I think as a team, we are pleased with the progress we are making and being up in third is something to definitely be positive about.

WSS: This week it's a break from the league as you play away to Abingdon United in the semi finals of the Berks & Bucks Cup, what kind of match are you expecting against them?

SB: We are expecting a hugely competitive game on Sunday. Abingdon are an experienced side with lots of goal threats. They have just come off the back of a loss to Moneyfields, a team they are battling with to win the Southern Region League, so they will be eager to reach a cup final themselves. We have to ensure every single player turns up on Sunday and performs to the best of their ability in order for us to be successful.

WSS: You last won the County Cup in 2017 (it has only been completed twice since) so is that now a huge priority in your season?

SB: Everyone would like the opportunity to compete in a Cup Final so yes, it is a huge priority in our season. Realistically, we are not going to win the league so this is certainly a great opportunity for us to win a competition this season.

WSS: The likes of Gemma Fraser are always likely to hit the headlines with their goals but as a defender, how much pride do you take from your recent record?

SB: Playing in a defensive position, you are always used to the strikers getting the headlines for their goals but defenders have goals too and we take just as much pride keeping a clean sheet along with the goalkeeper, as strikers do in their goal record. If we are able to keep a clean sheet then we are helping our team to have a greater chance of winning a match and that our contributions to the team are just as important as those scoring the goals.

WSS: Division One South West looks to be quite a strong one this season with a number of teams having led the table at one stage, has it felt like that with the teams you have played against?

SB: This league has always been strong and highly competitive. There is not one game in the season that we can go into the mindset of just turning up will get us the three points and it has been exactly the same this season too. Every year, all of the teams seem to get stronger and stronger and we just have to make sure we keep doing the same.

WSS: How possible do you think a top three finish is for Chesham this season, and who do you feel will eventually win the league?

SB: I think finishing in the top three is our aim and hopefully we will be there at the end of the season. We have still got quite a few games left so anything could happen, we just have to keep believing in our processes and keep going right to the end. It is hard to say who will eventually win the league as there is still three or four teams that could do this and many of these teams have to play against each other, I wouldn't like to call it right now!

Our thanks to Stacie! 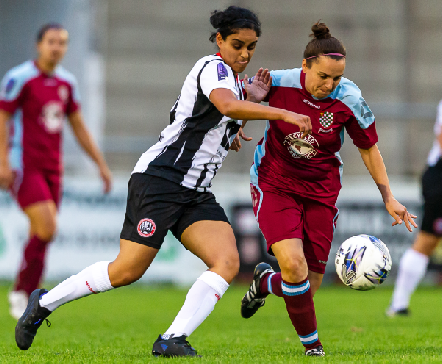