Whilst the majority of games in SWPL 1 were postponed due to Scotland’s involvement in the Pinatar Cup, there were still two matches which went ahead in the top flight.

The top two were not in action but third placed Celtic had an opportunity to close the gap on them when they played at home to Hearts. Celtic got off to a great start when Caitlin Hayes headed them in front after seven minutes but they were repeatedly frustrated in their attempts to score a second as they found Hearts goalkeeper Charlotte Parker-Smith in fine form, pulling off a number of saves. The Hoops finally made the points safe as Mengyu Shen broke Hearts’ resistance with the second goal, to seal a 2-0 win which means they are now four points off the top, albeit having played two games more.

The other games to be played was a vital clash at the other end of the table between Partick Thistle and Spartans. Rebecca Galbraith gave Spartans the perfect start as she curled home a superb shot in the opening minute but Thistle were to bounce back and turned the match around before the break. First, Rachel Donaldson levelled the scores when she thumped home a header from a free kick by Cara McBrearty, who was also involved as Linzi Taylor scored the goal which put them in front. Galbraith scored her second from the penalty spot with seventeen minutes remaining and the resulting 2-2 scoreline means that Spartans have now drawn eight of their matches this season, whilst the point takes Partick out of the bottom two at the expense of Hearts.

Dundee Utd further strengthened their position at the top of SWPL 2 and are closing in on the title, moving themselves closer with a 6-1 victory over Kilmarnock. Danni McGinley and Chloe Clemison put them two ahead inside the opening half hour, before McGinley and Jade McLaren doubled their advantage just ahead of half time. Rebecca Foote made it five in the opening minute of the second half and after Alex Middleton pulled one back late on from the penalty spot for Killie, Rebecca McMillan rounded off the scoring for United with two minutes remaining.

United were boosted even more by the news that second placed Glasgow Women went down to a 1-0 defeat at the hands of St Johnstone. Fern Newbigging scored the only goal of the game for St Johnstone on the quarter hour, to condemn Glasgow to only their second league defeat of the season.

Boroughmuir Thistle meanwhile narrowed the gap on second place to four points as they ran out 4-0 winners over Queen’s Park. Samantha Duncan gave Thistle a twelfth minute lead and Maria Novou Torrente made it two just before the half hour mark. After the break, Duncan netted twice more to complete a hat-trick on the day and ensure a third straight win in the league for her side. 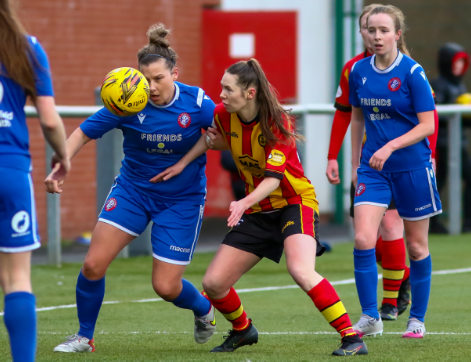 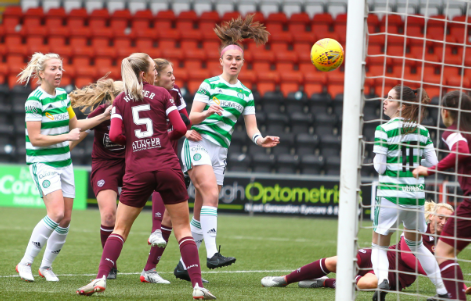