LFA Dynamos secured a semi final spot in the Capital Junior Cup with a hard fought 2-1 away victory over Brentford B.

Dynamos, one of several teams under the Ladies Football Academy set up based in Clapham, scored early and late to clinch the win over the hosts. In a very good contest played in an excellent spirit, Dynamos impressed with their attacking intent but came up against a spirited and determined home team who had chances to win the tie before conceding late on.

Dynamos were ahead in their first attack when Nailah Nisbeth blocked a clearance which rebounded into the net inside the first minute. Playing with a strong breeze behind them, the visitors forced several corners but the Bees defence stayed strong and eventually started to threaten Ashley Kelmore in the Dynamos goal.

A fine save by Carol Checkley midway through the half prevented Nisbeth from adding a second, getting down to turn away a low shot for a corner as the visitors continued to offer a threat but the interval was reached with just that early goal separating the teams.

Brentford returned with good purpose and were level with a superb strike. Kasey Clifford was often looking to shoot from distance and around the hour mark she caught a 25-yard effort to perfection to level things up.

Dynamos started to create dangerous situations around the home goal through well crafted interplay with Nisbeth, Rebecca Fieldus and substitute Gemma Hallisey with her corner deliveries requiring strong defensive work from all the Brentford team. The outstanding moment of this half was Lillie Elsbury's goal saving block on the line, diving to divert what appeared to be a tap in certainty after a goalmouth scramble on 75 minutes.

Just when a stalemate over 90 minutes seemed certain, Dynamos regained the lead when another close passing move left Bethany Waring through on goal to slide the ball past Checkley.

Even then, Brentford could have taken the match to penalties but for a fine save by Kelmore diving to hold a low shot with attackers ready to pounce on any loose ball.

LFA Dynamos, who have competed very successfully in the CWSFL Premiership and were founded in 2014, will compete for a place in the Capital Junior Cup final after a very impressive quarter final win.

Cheyenne Faulkner tries to get past 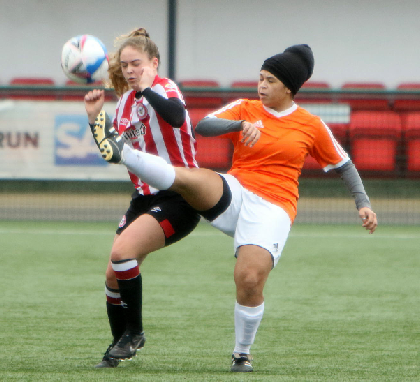 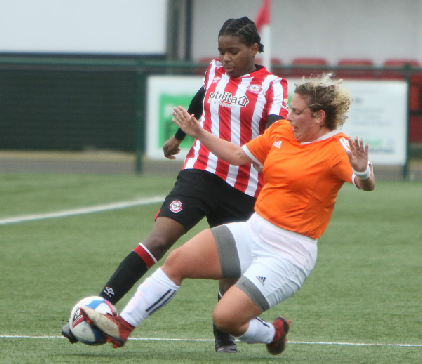 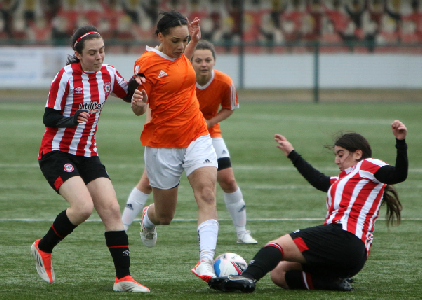