Boldmere St Michaels are having a magnificent season in FAWNL Division One Midlands and on Sunday, a late goal from Alex Liddiard gave them a 3-2 victory over Long Eaton Utd and took them three points clear at the top of the table.

Vice captain Daina Scott has been a key player for the Mikes this season and whilst being pleased with what she described as a ‘vital’ win against one of their fellow title challengers, she admitted that they are not looking too far ahead and insisted that they need to continue improving in every game they play:

WSS: Well done on the win on Sunday, how tough a match was it against a team that has been amongst the challengers all season?

DS: Thank you! We know Long Eaton are a difficult team to play against due to their physical nature and their direct style of play. However, we made the game difficult for ourselves, our usual quality was missing in parts, particularly in the first half. Although, with this being said, we could have been 3-0 up in the first 25 minutes but their keeper made some great saves to prevent this.

WSS: Were you always confident in the later stages when you were 3-2 ahead?

DS: As a team we’re always confident, regardless of the time or score. We always believe that we are going to score and keep the opposition out. We finished off the game strong and deserved the win. We back each other all over the pitch, which is what I think gets us over the line in tight games.

WSS: Was it a particularly important result given that Doncaster Rovers Belles weren't playing a league game?

DS: Definitely, this game was vital as it meant we would finally be equal on games played in the table, and we knew that a win today would mean we’d be top based on points as opposed to goal difference. Unfortunately the Donny v Long Eaton match was called off in the week, it would have been nice to see how the two teams matched up before we played Long Eaton, but ultimately we can only control what we do, and on the day we did the job.

WSS: That makes it six league wins in a row and takes you three points clear at the top. After Donny had opened up a lead a few weeks ago, you must be delighted with the way the team reacted to that?

DS: Yeah of course, the team has been brilliant, particularly since we conceded a last minute equaliser against Donny in January. I’d say that spurred us on to ensure we get the three points in the upcoming games, every game was a must win, no matter what. We knew we had games in hand and never once thought, promotion may not happen this season, the belief and morale in the squad is very high.

WSS: This week you are at home to Bedworth United, given the respective league positions of the two teams, is the most important thing to guard against complacency?

DS: We’ve learnt the hard way in previous seasons to never be complacent against Bedworth, they have some talented players, and most importantly, they never give up or get on each other’s backs, regardless of the score. We go into Sunday’s game knowing that Bedworth are going to make it very difficult for us, they’re physically strong in the middle of the park and we need to be aware of that, as well as their talent in wide areas.

WSS: As things stand, things are in your hands in the title race, are there are really important games left for you to play or are they all the same now?

DS: All of our remaining games are important, we need to treat each game like a cup final. There have been some unpredictable results in the league, showing that anyone can beat anyone. We’re yet to play Leafield this season, so that will be a new test for us, and we also have Lincoln to play, who are a quality side, so we know we need to continue improving each week.

WSS: Your team are usually around the leading sides in your division over the last few seasons, what do you think has been the main difference this time around?

DS: We’ve been growing as a club for a few years now, strengthening each season. I think this season we have a good balance and a lot of depth within the squad. The appointment of Simon [Noakes] as our head coach/manager has helped each individual in the squad, he demands more from us each week because he sees the talent we have and always wants us to play and train to our full potential

WSS: If you did win the league and were promoted to Tier 3, how big an achievement would that be for your club?

DS: The promotion to Tier 3 would be huge for Boldmere, and something that the club, staff and players all deserve. We’re not seen as a ‘big name’ club so playing the up in tier 3 would put us on the map and show that regardless of how well known the badge is, we have the quality to compete.

Our thanks to Daina! 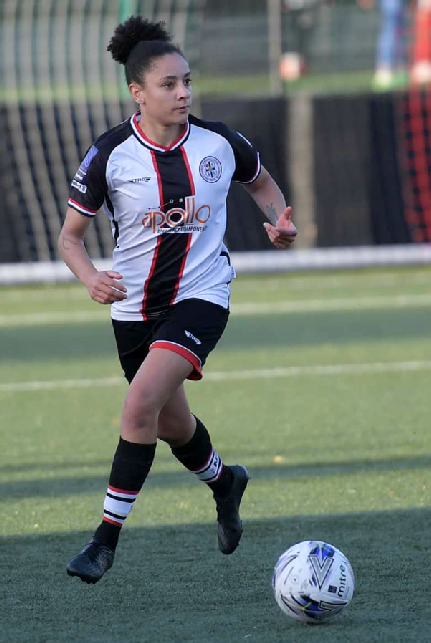