Glasgow City remain a single point ahead in the Park’s Motor Group SWPL 1 table following a six-goal blast against Motherwell. Lauren Davidson gave City a fifth minute lead and after Megan Foley had made it two, Davidson scored her second. Priscilla Chinchilla then produced two superb strikes from outside the area ahead of half time. Mairead Fulton rounded off the scoring with another long range effort, nine minutes from time.

Rangers kept themselves on course in second place, one point behind but with two games in hand, after getting over an early setback to beat Partick Thistle. Linzi Taylor headed Partick into a fifth minute lead but Rangers hit back strongly, Kayla McCoy and Zoe Ness turing the score around and McCoy netting a second before the interval. McCoy completed her hat-trick early in the second half and Lizzie Arnot added a further two, one from the penalty spot.

Celtic continued the chase in third place with a 3-0 success away to Aberdeen. Charlie Wellings gave them the lead from close range and they rounded off the win with two second half strikes, Jacynta Galabadaarachchi making two and Tegan Bowie powering in a left footed effort in injury time.

Spartans are starting to hit their best form and have moved to within three points of fourth placed Hibernian after beating them 2-0 in their local derby. Rebecca Galbraith slotted home to put them ahead four minutes before half time and the striker wrapped up the win when she headed in her second from a corner, just after the hour.

Hearts and Hamilton Academical meanwhile battled out a 1-1 draw which does neither side a big favour as they look to climb out of the bottom two. Both goals came in the first half, Aimee Anderson giving Hearts a seventeenth minute lead which was  cancelled out nine minutes later by Lauren Evans.

Dundee Utd kept up their march towards the SWPL 2 title by beating Queen’s Park 3-1. United were made to work hard by the Spiders though, falling behind midway through the second half when Rachel Connor put the visitors in front. Jade McLaren equalised four minutes later and a late double from Tammy Harkin secured a result which keeps United fifteen points clear at the top.

Glasgow Women got back to winning way with a 2-1 success at Boroughmuir Thistle, which puts a seven point gap between the two teams. After a goalless fiurst half, Sophie McGoldrick gave Glasgow the lead ten minutes after the restart and although Alix Wilkinson levelled matters for Boroughmuir from the penalty spot, McGoldrick scored her second three minutes later to give Glasgow victory.

Kilmarnock are just a single point off the top three following their 4-0 victory over Stirling University. Laura McLaughlin, Amy Burrows and Lisa Swanson ensured that Killie were three goals ahead at half time, before Leia Swan rounded off the scoring with five minutes remaining. 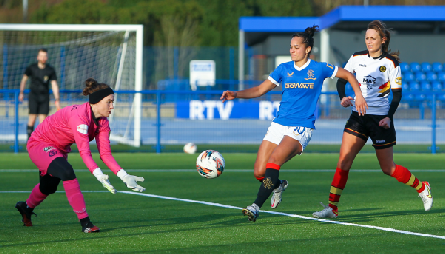