Burnley FC Women produced one of the surprise results of the season on Sunday when they won 3-0 against previously unbeaten Northern Premier Division leaders Wolverhampton Wanderers, to stretch their unbeaten run to seven matches.

Midfielder Nicola Worthington has been a key player for the Clarets in recent seasons and she was delighted with the team’s dominant performance in the match, as well as being confident that the team are capable of building on its recent good run and going on to better things in the future:

WSS: What a fantastic result on Sunday against the league leaders, was that the best the team has played all season?

NW: I definitely expected this to be our most challenging fixture given Wolves’ results so far. However, I did feel that we were comfortable on Sunday and managed the game extremely well, giving Wolves very little.

WSS: Was it a game where you always felt in control after you took the lead?

NW: Absolutely, I felt we controlled the game from start to finish, minimising Wolves’ threat on our goal. It was probably one of our best performances as a team overall.

WSS: Your last three league games have been against the top three and you have picked up seven points, you must be delighted with the way the team is playing right now?

NW: It's been an amazing run of form since the start of the year. We have stuck together as a team and our togetherness and hard work have got us the points against three very good sides.

WSS: Seven games unbeaten now, was there anything that was changed or altered after your start to the season or even a result which was a turning point?

NW: Nothing in particular, we always strive to work hard, have a desire to win and be ruthless and at the start of the year we set ourselves a goal to be unbeaten in January. This has now obviously carried on way into March, so we are delighted. When you win, you want to win the next game and the next, so there is a good mentality in the group.

WSS: No game for you this Sunday but then you have away trips to Brighouse and Huddersfield within a few days, what are your thoughts ahead of those two matches?

NW: Two big away games against strong Yorkshire opposition. The midweek away at Brighouse will prove a test for us, obviously we are keen to win as they beat us on home soil in October.

WSS: Do you still think you have a chance of winning the league?

NW: I always say ‘never say never’. If we go unbeaten now until the end of the season and a few results go our way then who knows, we might just sneak up there.

WSS: How big are the club's ambitions for the future, and how far do you think it is capable of going?

NW: I would love to see us progress into the championship in the next few seasons. We definitely have the talent and the work ethic to match so I believe this group can make that jump.

Our thanks to Nicola! 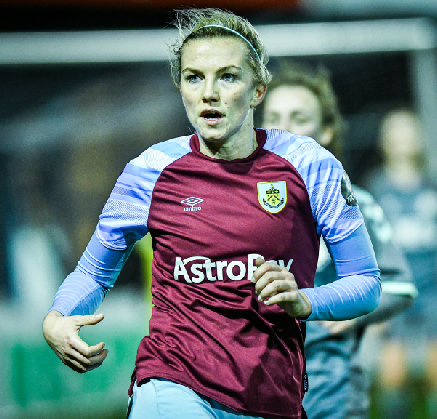