Glasgow City stay one point ahead

Glasgow City held on to the leadership of Park’s Motor Group SWPL 1 and put a huge dent in Celtic’s challenge after they beat them 2-1 with the benefit of two first half goals. Priscilla Chinchllla gave City the lead and Clare Shine made it two on the stroke of half time. Charlie Wellings renewed hopes for Celtic just after the hour mark but City managed to hold on for three vital points to keep hold of their one point advantage.

Rangers meanwhile swept to a 4-0 victory away to Hamilton Academical. Jane Ross opened the scoring with a well taken goal and Kayla McCoy doubled their lead just before the break. McCoy completed her double after the break and Janni Arnth Jensen headed in the fourth goal late on.

Hibernian rediscovered their winning form and in some style, defeating Motherwell 7-1. Alexa Coyle gave them the lead in the opening minute and the striker added a second goal, before Joelle Murray and an Amy Gallacher penalty put them four ahead at the break. Eilidh Adams further increased Hibs’ in the second half with a brace and Gallacher rounded off their scoring with her own second goal, before Amy Anderson netted an injury time consolation for the visitors.

Spartans continued their recent good form by running out 4-0 winners over Hearts. The game swung firmly Spartans’ way with goals either side of the interval, a Holly Aitchison own goal giving them the lead on the brink of half time and Louise Mason doubling their advantage two minutes after the restart. Caley Gibb and Emma McFadyen then added further goals in a five minutes spell to put the seal on a third successive win for their side.

Aberdeen meanwhile came from behind to win 2-1 away to Partick Thistle in a match tinged with some controversy. Thistle got off to a great start and took a ninth minute lead through Cara McBrearty and then had a second goal ruled out for a foul. The game turned around in the second half when Bayley Hutchison equalised just before the hour mark and the young striker netted her second to secure the win, eight minutes from time.

Dundee Utd are now so far ahead at the top of SWPL 2 that they are almost on a lap of honour. They followed up a Thursday night win over St Johnstone by

beating Stirling University 3-0, opening up a lead of twenty points in the process. All of the goals against Stirling came during the first half, Robyn Smith putting them ahead after six minutes and two goals in a minute from Jade McLaren, shortly before half time, put the seal on a sixteenth win in eighteen matches.

Glasgow Women remain on course for the runners-up spot despite being held to a 2-2 draw by Kilmarnock, the sixth time they have shared the points in a league match this season. Glasgow led at the break with a goal from Robin Gallacher, with Alex Middleton levelling the scores just before the hour. Sophie McGoldrick put Glasgow back in front again but once more, Killie fought back for a share of the spoils when Lisa Swanson equalised three minutes later.

Boroughmuir Thistle’s hopes of challenging for second place took a knock as they drew 1-1 with St Johnstone. Courtney McAvoy gave Boroughmuir the lead on 21 minutes, with the visitors hitting back after the break to earn themselves a point through an Ellie Cowie goal.

Glasgow City striker Priscilla Chinchilla gets away from Tyler Toland of Celtic Women. 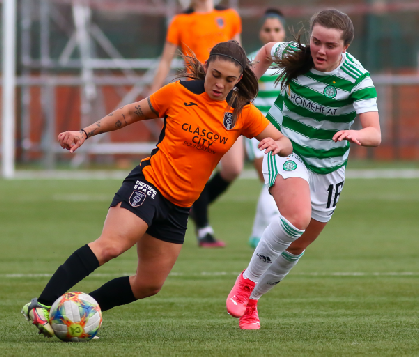 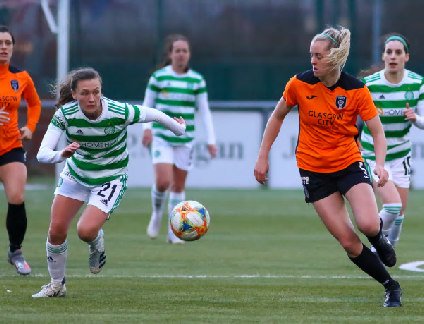