Teversal became one of the first teams to land a league title this season when they were confirmed as the winners of the Nottinghamshire Ladies League Division Two last month.

The title success puts a happy ending to much hard work behind the scenes and joint manager Lucy Smith told Women’s Soccer Scene how things were turned around in a relatively short time:

“Two seasons ago, in 2019, Teversal Ladies Football Club were on the brink of collapse due to little interest in the recruitment of players and Senior Management moving forward onto different coaching opportunities outside of Teversal Football Club, this left the future of the ladies team in doubt.

“Myself and Chantelle Mcintosh agreed to take on the challenge as Joint Coach/Managers, using our knowledge of the game and putting a plan of action together on paper and making it happen. When we first took on the role, we both discussed our ambitions of the team and what we want to realistically achieve for our women and to follow and incorporate this into Teversal Football Club’s DNA. Myself and Chantelle had said that our aim is to bring silverware to the club and to win the league title for Division Two!

“We started by reaching out to our players with a new approach to coaching, using our own ideas and the ideas of the ladies to set out plans moving forward. We also set out plans for local radio interviews and local newspaper interviews to help with player recruitment and sponsorship opportunities (with thanks and help from our Captain Tiff Musgrove). One of our main goals was to reach out to businesses for the ladies’ first ever sponsorship in over eight years, with success and appreciation we were able to set up an interview with Mansfield 103.2 Radio and the Mansfield Chad newspaper, after reaching out to our local news outlets.

“We were first in touch with England internationals Jade Moore and Josanne Potter who generously helped fund the start our our journey, I then had a call from NXTGen Technology Ltd who had also been inspired by our story, we discussed options of sponsorship and what would be beneficial to our ladies and also most importantly to our sponsors. After discussions we then received that all important phone call - SUCCESS - we were then able to secure our first ever team sponsor, new training kit, training jackets, new home and away kit… WOW! this was overwhelming for our ladies as this was the first time we had ever secured a sponsor, we had always inherited the previous season kit handed down from the mens senior team, this was no more….. the women were ecstatic. This gave the team a new lease of life and faith within the new management team and that is all thanks to our fantastic sponsors who gave us this opportunity, NXTGen Technology Ltd, on behalf of Teversal Ladies FC, we thank you.

“With a lot of work and preparations happening in the background, we successfully managed to recruit a new secretary, Jodie Lofley, Pete Warburton as Goalkeeper coach, Emma Anthony - first aider and all round mother of our ladies team. With new management in place and the story of TLFC, a number of ex-players returned to help out as Teversal Ladies FC holds a special place in everyone’s heart involved within the club.

“On 6th February 2022 Teversal Ladies FC made history – doing something that no TLFC team has done before. They did not only win the league, but they did it with four games to go… winning 12 out of 12 games, achieving 36 points – being crowned the uncatchable champions!

“For many reading this, it might not seem a massive achievement winning Division Two, but for those who know the struggles of TLFC and the challenges faced it is massive!

Both Lucy and Chantelle have given up a lot of their own time to keep the team going but there are a number of other who Lucy feels deserve a special mention:

“Jodie Lofley – treasurer, secretary, all around organiser, captain Tiff [Musgrove] for her work on and off the pitch, including managing the Facebook page and keeping it up to date.  Vice captain Amy Bacon and Emma Smedley for washing and organising the kit each week.

“All the players for the efforts, 12 wins, 90+ goals scored and only 17 conceded… and the season isn’t over yet! Pete Anthony – Goalkeeping coach, giving up your evenings and weekends to help us out. Emma Anthony, the funniest first aider, sacrificing her sandwiches along the way and Keith Parnill for clocking up the miles to support us at most games and writing the match report. Cadge and John behind the bar at Teversal FC who have always supported us, plus the sponsors NXT Gen for their amazing support and generosity.

“Most importantly, all of our supporters. Thank you all for following us, not only through social media but pitch side. Your support means more than you can imagine!

“A team which came close to folding, to now being champions is an amazing accomplishment and we would like to thank everyone involved!” 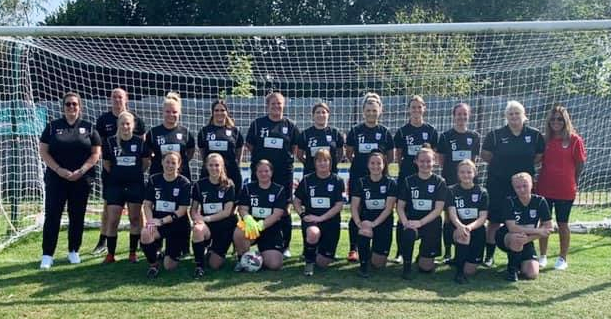