Rangers go back to top

Rangers regained top spot in Park’s Motor Group SWPL 1 on Wednesday night when they won 2-0 away to Aberdeen. In front of a crowd in excess of 1,800 at Pittodrie, second half goals from Kirsty Howat and Kayla McCoy gave Rangers three more points.

On Sunday, Rangers had come from behind to win 2-1 against in-form Spartans. Rebecca Galbraith had put Spartans in front on the half hour but after Brianna Westrup had headed Rangers level on the stroke of half time, Tessel Middag slotted home the winning goal with twelve minutes remaining.

Glasgow City had kept themselves as leaders by beating Partick Thistle 2-0. Hayley Lauder opened the scoring for City via a first half free kick and Lauren Dsvidson wrapped up the win with the second goal after the break.

A strong second half performance helped Celtic on their way towards a 6-1 victory over Motherwell. Clarissa Larisey’s opener for Celtic was cancelled out by Jemma Hughes, but after the break, Annie Timoney put them back in front and they went on to seal the points thanks to Charlie Wellings, Isibeal Atkinson and a Chloe Craig double.

Hibernian ran out 4-1 winners against Hearts in their local derby match. Alexa Coyle gave Hibs a first half lead and they added further goals after the break through Michaela McAlonie, Shannon Leishman and Eilidh Adams before Maria McAneny grabbed a late consolation.

Hibernian went on to beat Partick Thistle 1-0 at Easter Road on Wednesday evening, with Eilidh Adams scoring the only goal of the game.

Aberdeen are back in the top half tollowing their 2-1 victory over Hamilton Academical. After a goalless first half, Bayley Hutchison fired the Dons in front and they secured the win with a late strike from Chloe Gover, despite a reply from Megan Quigley.

Dundee Utd clinched the SWPL 2 title with five games left to play, following their 4-0 victory away to Kilmarnock. Tammy Harkin netted a first half brace, before Danni McGinley made it three and Harkin completed her hat-trick to crown a great day for her side. After dominating the division virtually all season, United can now look forward to top flight football.

Second placed Glasgow Women meanwhile went down to a 2-0 defeat at the hands of St Johnstone. Morgan Steedman netted a goal in each half to earn St Johnstone one of their best results of the season to date.

Boroughmuir Thistle made up ground on Glasgow with a 2-1 win away to Queen’s Park. The Spiders took a seventeenth minute lead through Rachel Connor but Boroughmuir were back on level terms just after the half hour thanks to Courtney McAvoy and  Samantha Duncan netted the winning goal, nine minutes into the second half. 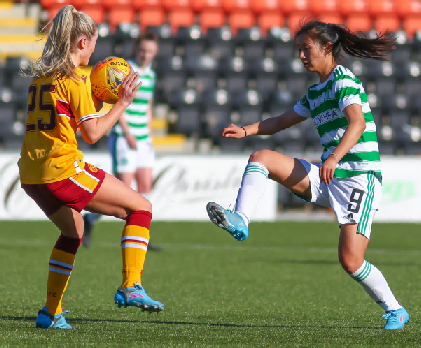 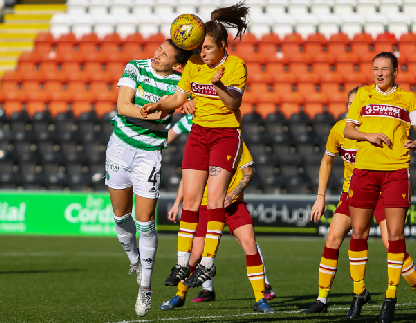