Contrary to the final scoreline, this was a good, highly competitive contest for the most part with chances at both ends of the pitch. The young Reading team based at the JMA Academy took their chances whereas Chesham could not convert any of theirs, despite playing well in creating dangerous situations.

Reading started with great intensity forcing several corners but the Chesham defence dealt very well with crosses and prevented any clear cut opportunities for the Royals. At the other end, goalkeeper Rhiannon Stewart made a fine save as Chesham had a spell of good pressure around the twenty minute mark.

Although Reading had the majority of possession in the first 40 minutes the better chances had fallen to the FAWNL side, but the crucial opening goal went the way of the Reading youngsters. A low left wing cross found its way to Isabella Stockton and her finish was low and well directed from 15 yards.

Reading's shooting was well executed throughout and they rattled Amber Taylor’s crossbar within three minutes of the restart but the second goal came by way of a penalty converted by Mae Goulden on 54 minutes.

Chesham had their best spell around the hour mark, creating a trio of good chances to get back into the contest as the Reading defence wobbled but the shots were high, wide and Stewart made one fine reaction save from a Gemma Fraser effort.

Reading extended their lead with a neat move down the right which freed Davina Spinoza for a close range finish on the far post on 73 minutes. Two further late goals gave the final score a harsh feel but both were quality finishes, a through ball well controlled and dispatched on 85 minutes and superb 20 yard shot high beyond the leaping Taylor's outstretched hand with the final kick of the game.

Whilst Chesham will be disappointed by the outcome, they played with good tempo and intentions and lacked only finishing precision. The talented teenagers of Reading played some attractive positive football matched by excellent finishing to win the match and lift the Cup.

Sophie Baigent under pressure from 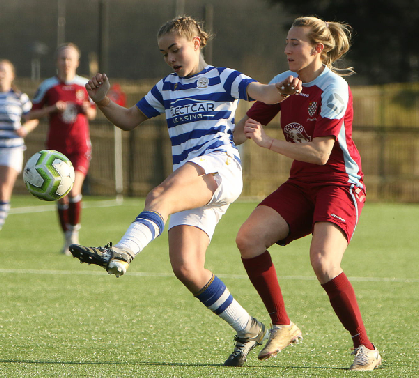 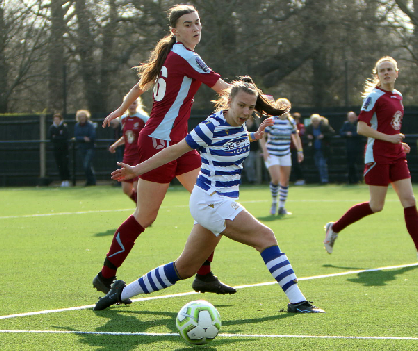 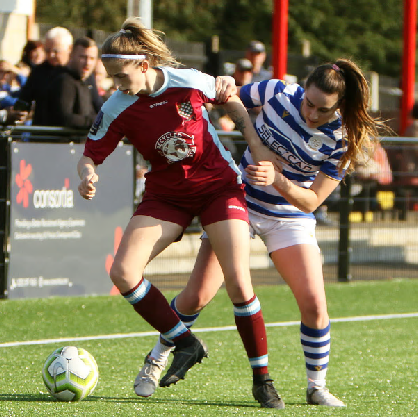