Stanway Pegasus ladies was formed at the end of last season, with the club wanting to offer a pathway not only for boys but girls as well.

They never imagined they would be sat top of the Essex County Women’s League Division Two table with one game to play, currently unbeaten.

Manager Gerry Jolly has been around the women’s game at grassroots level for around 20 years, spending many years involved heavily including at Chelmsford City Ladies. After a small break from football, the aspirations of Stanway Pegasus teamed with the huge support of the men’s club proved too much to resist and into the fold he came. His calming nature and fantastic personal skills see him hold huge respect from the ladies.

The captain of Stanway Pegasus Ladies is Lindsey Cowell. A big personality and the glue of the team on the pitch, she leads by example with a competitive and extremely hard work ethic.

Top goalscorer this season so far comes as no surprise, Rosi Webb scoring an impressive 22 goals in 10 games from centre midfield. “We must also mention the hugely important role Rosi has played on and off the pitch this season and the months leading up to it,” says Stanway Pegasus player, Sarah Jolly. Without Rosi, the women’s team would not be what it is today. Rosi is hugely involved in the club including being the men’s first team manager and coach (who by the way have currently gone unbeaten all season!). Rosi has ensured the ladies team has got everything behind the scenes such as sponsorship, kit, training facilities, the list goes on…

“However whilst mentioning this, a huge thanks must also go out to Ian Booth, club owner. It is rare for a ladies side to be connected with a men’s club and be on such a level playing field with the men’s first team. We are treated exactly the same and anything the men’s side have we do too. The support we have had from Ian and the club is unprecedented and we cant thank him enough for making our team feel welcome!

“Another thanks is to our trusty linesman Chris Cowell who without fail comes to every home and away game to run the line for us, and of course huge thanks to our small group of ‘superfans’ come rain or shine are there to give us that extra boost from the sidelines!

“All these people make what Stanway Pegasus is, to win you don’t need just eleven players, you need a TEAM on and off the pitch. Stanway Pegasus Ladies has become a family and that is what has won us the title the season.” 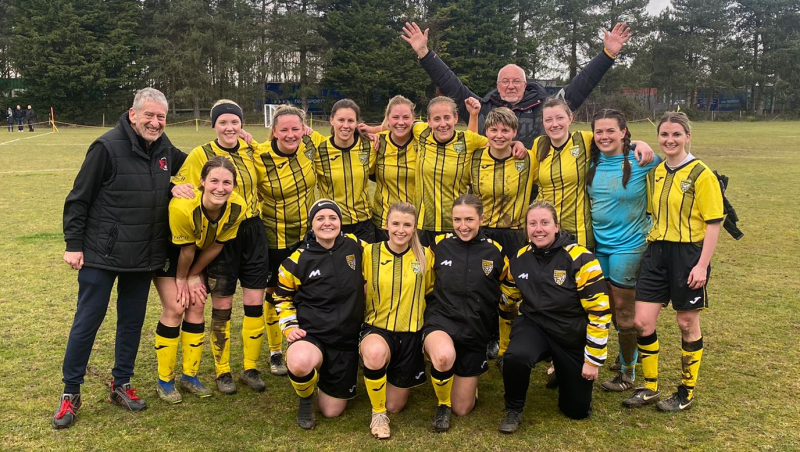