A season to remember for Merseyrail

47 goals scored and 14 conceded in 17 games is an impressive feat at whichever level of football you look at. It has been a special season for everyone associated with Merseyrail Ladies as they ran riot in the Premier Division of the North West Women’s Regional League.

The overriding emotion for Manager Lee Austin was how proud he was of his players. With somewhat of a fresh start for the club with new players, staff and facilities, it’s easy to see why.

“I was the assistant manager at this club the last time we won a league title,” he said. “After four years away and the club being at the place it was and us coming back and giving it that little push and revitalisation to get it moving forward again, to achieve my dream in the first season is pretty special.”

Ever since the new age of the club was born last summer, there was one thing on the end of everyone’s lips; promotion. But, as we all know, especially in football that talk is cheap. Saying and doing are two very different things and some would have thought that the team would need a period of adjustment and stability, those calls were soon proven wrong.

If you take a delve into the MRLFC website and social media pages there is a message that lays bare almost everywhere you look, ‘#MoreThanAGame.’ Albeit simple in meaning but a clear rhetoric and ethos embedded in a football club has become a key component in this modern era.

That’s exactly what Austin and his coaching team have set from day one which he believes is a recipe for success: “I’ve always thought that if you put a solid foundation in, you create an environment where everyone feels that they’re playing a part.

“They’re [the players] trusting with what you’re trying to achieve and more importantly that they’re part of something. You’re not just doing it for a kickabout or a game of football, you’re part of a bigger aspiration and you’re playing your part in, not just about the now but what the future holds for the club.

“When you believe in that ethos and you buy into it then if it all falls into place, it almost become unstoppable.”

Creating that healthy atmosphere breeds success and is not easy to formulate but everything seems to have fallen into place at Admiral Park.

That combination of talented players and an environment everyone wants to be a part of is a formidable task to break down which was proven in a grueling season.

There were some unforgettable moments that put that ethos to the test. The unexpected clinch of promotion at Mossley Hill, the huge rivalry with Tranmere Rovers and not to forget, missing out by a whisker to reach the FA Cup main draw.

That is without forgetting the challenges as well. A striker having to go in goal, suspensions, injuries and of course, Covid to try and juggle with to keep maintaining the results and performances on the pitch.

When the Head Coach was asked about his standout moment of the season, he had a definitive answer: “Cheadle away. It was one of those games where we’d been beaten by Darwen and there was a lot going on in that game, a lot we needed to understand about the way we played, the team I picked, how we dealt with losing and then to come and have a tough game against Cheadle, who do everything right off the pitch.

“Ceri (Holder) from right back throwing one in the top corner and the emotion on the pitch, off the pitch with the fans, our reaction as coaches, it just injected belief into us that this is possible. This could be ours and if we don’t give up in games and stay together in games, we’re always going to be up there for the win and I think that game really did and kind of inspire all of us to work harder and stick together.”

Prior to the season, it’s fair to say there was an overhaul in new signings. After the upheaval in signings, the squad consisted of existing Merseyrail players, former Tranmere players with the new coaching team and additional new arrivals acquired in pre-season.

It seemed a big task to integrate the new, but exciting squad. But, the players and management made it look like a breeze and this is best shown by their league record of just one loss and being unbeaten at home all season long.

The playing squad has been fully utilised and a flurry of goals has been supplied from across the team, without forgetting the formidable back line and Jess Carberry in goal with them being branded as ‘absolutely fantastic.’

“The performances of people like Georgia Wood and Charlotte Cloy and Ceri and little Charlotte [Tyers], Chelcee [Grimes] they’ve made a massive difference to this club because we were adding to quality players that were already at Merseyrail.”

After the ecstasy, there is still work to do. The Toxteth-based side have made it to the semi finals of the Liverpool Women’s Senior Cup against Mossley Hill, who they beat just weeks ago to seal promotion.

Austin and the coaching staff have been keen to get the players to avoid complacency and emphasising there is always something to play for in every game.

More importantly, from the club’s perspective, this is only the beginning. There are still plenty of short and long term goals to accomplish and writes a new era for this exciting club: “Everyone’s made up and happy that we’ve got that league and what it means, for me it’s about progression.

This is just the start so it’s about building the infrastructure and the club up.”

One thing is for certain. All the time Lee Austin and his coaching set up is at the club, they’re in safe hands to start a legacy. 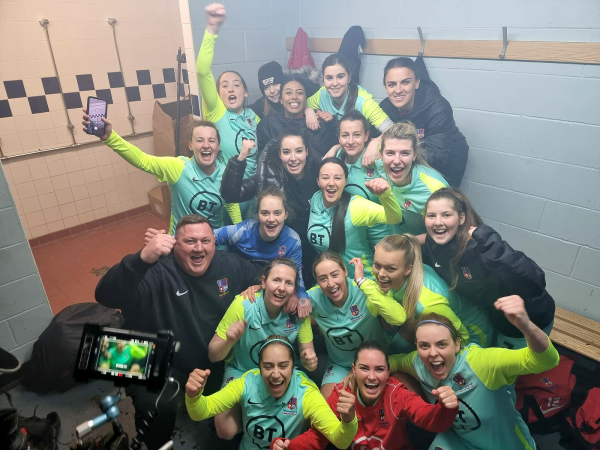