Chesham United are claiming something of a 'first' in the FA Women's National League, with the news that their captain and long serving player Dawne Campbell recently became a grandmother.

Dawne's daughter gave birth to a baby girl, named Aylani Rose, earlier this month and the prospect of a grandparent playing in the women's game, particularly within the top four tiers, is a rarity.

"It feels great to become a grandparent," a proud Dawne told Women's Soccer Scene. "I had the privilege of being at her birth and also had two weeks off work to spend with my daughter and granddaughter. Her name is Aylani Rose.

"I would be very surprised if I wasn’t the only grandmother still playing FAWNL, yes I am very proud that I am still playing. I might get the odd age comment from the opposition, also at training from our girls too! I take it in good fun for now, that might change when I fail to be able to compete with them though! For now all is good though."

Dawne has been an amazing servant to Chesham United over the years, through good times and bad, and is currently in her 24th season with the club. She was a part of the original squad which reached the then FA Women’s Premier League, and after the club was forced to climb back up the women’s football pyramid once again, she captained them to Southern Region League title in 2017 and back into the National League, where they have remained ever since.

"Yes, I'm still very much enjoying my time playing for Chesham," she said. "The days following a Sunday are slightly less enjoyable with the recovery after the game though.

"Or course it would be great if Aylani decided she wanted to play football, I’d be on the side line every week for sure. My daughter wasn’t interested in playing, so maybe it skipped a generation!"

On the pitch, Chesham have had a good season in FAWNL Division One South West and currently lie in third place in the table. They also reached the Final of the Berks & Bucks County Cup - where Aylani attended one of her grandmother's matches for the first time (pictured) - and Dawne is confident that the progression the club has made is set to continue.

"This season has been good for us," she said. "There were a few games that we probably could and should have won that we didn’t quite manage to finish off, but that’s football.

"I can see the team continuing to improve, with the money coming into the league that can only lead to better things to come." 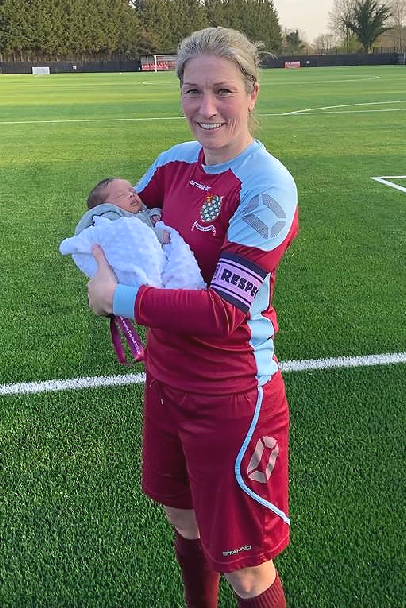