The title race in FAWNL Division One South East is set for an exciting climax between Hashtag United and Billericay Town, who have dominated matters between them all season. Billericay stepped up their challenge on Sunday with a 4-0 win away to Cambridge United.

Ellie Jeffkins has played an important role for Billericay both in defence and midfield and she told us of the belief within the squad that, after going close to promotion in recent seasons, they are ready this time to go all the way:

WSS: Another good result for your team on Sunday, how pleased were you with the team's performance on the day?

EJ: Yes very pleased, always a good feeling when you’re the away side and manage to take all three points home!

WSS: Did the first goal lift any nerves amongst the players, seeing that you added two more in quick succession before half time?

EJ: I think the first goal did lift a lot of nerves. There are nerves in every game especially playing in front of a crowded stadium. So that first goal settled everyone down and the football flows a little bit more.

WSS: Zoe Rushen has had a great season for you with 23 goals but is it a sign of the team's strength that you have had at least half a dozen other players who have regularly got on the scoresheet?

EJ: Most certainly! But can I just add, wow … what a player Zoe is! Goal scoring machine! She’s deffo got more goals in her for sure! We are lucky though as we have the ability to score goals throughout the squad and it’s always nice to see other people on the scoresheet! Lots of players in this team are happy to have a shot when the opportunity is there.

WSS: Three games left to go and you know that the title will be yours if you win each of them, does that bring a different kind of pressure going into matches?

EJ: Of course the pressure is on but we know we are good enough and trust the whole group! We ‘ve managed to turn around a few bad situations in matches this season. We keep going right to the end. So we’ll focus on one game at a time and not get too far ahead of ourselves. This is football, so there may be more twists and turns to come. However, we know we are capable of doing anything as you can tell by our success so far this season!

WSS: The first of the three matches is this Sunday at home to Queen's Park Rangers, who you have already beaten twice this season. Can you see that having any bearing on the game this week?

EJ: QPR are a very strong side and we have no doubts that they will put in a good shift against us ! So the previous scores don’t really come into it. We know we have a big game on our hands and they will want to beat us. To be honest, when you are in the top couple of places throughout the season – everyone does !

WSS: At the same time, Hashtag United will play their last match of the season away to Enfield who also have much to play for, will you all be Enfield fans for the day as well?

EJ: Hahaha! We’re Enfield’s number one fans - just kidding, we will be just purely focusing on our game and the games we have left. We can only control what we do - not what’s happening around us!

WSS: You finished as runners-up in the last completed season three years ago and since then, you have had to compete against Ipswich Town. Is there a feeling amongst the squad that this is your time to win it?

EJ: Since the start of the season our squad, and performances, have gone from strength to strength! I think being runners-up, like you said, definitely makes us more determined to not make it a fourth year in a row. Last lockdown, we competed against Ipswich in the FA Cup and beat them at home, I think that was a really eye opener for ourselves and others. People started to believe that we are good enough. We believe in ourselves. However, we’ll have to wait and see if that’s the way things turn out.

WSS: If you are able to do it, how confident are you that the team can thrive at the higher level?

EJ: I am super confident that we can compete at the higher level. We’ve played teams from higher leagues in the cups and held our own. For example, we took Championship side Coventry to penalties in the FA Cup having competed strongly for 120 mins. It shows how competitive we are!

Our thanks to Ellie! 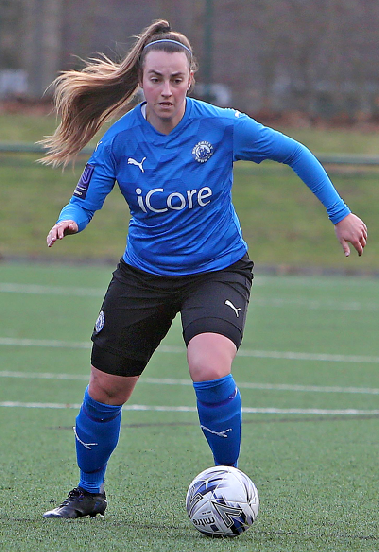