Holders through to semi finals

Holders Glasgow City are through to the semi finals of the Biffa Scottish Women’s Cup after they won 8-0 away to Stirling University.

Priscilla Chinchilla led the scoring for City by hitting a hat-trick and Kerry Beattie weighed in with a double, whilst Lauren Davidson, Hayley Lauder and Jenna Clark also got on the scoresheet to help take their side through to the semi final stage once again.

Three of the quarter final ties were played on Friday night and the other took place on Sunday, which saw Celtic win 2-0 at Aberdeen. Celtic took the lead four minutes before half time when Shen Mengyu curled a shot home after exchanging passes with Clarissa Larisey and Jodie Bartle powered in a header for the second, just ahead of the hour mark.

The result of the round undoubtedly went to Partick Thistle, who eliminated former winners Hibernian by defeating them 4-2. Partick raced into a two-goal lead during the first half thanks to Clare Docherty and Taylor Hamill and Cara McBrearty made it three early in the second half. Hibs then staged a fightback and reduced the arrears to a single goal thanks to Shannon Leishman and Michaela McAlonie but Thistle sealed the victory with eighteen minutes remaining when Cheryl McCulloch scored the fourth. The game was also notable for Partick captain Demi Falconer making her 100th consecutive appearance, having not missed a minute of action during that time.

Completing the semi final line up are Hearts who were 2-1 winners over Kilmarnock. Maria McAneny gave Hearts the lead during the first half and after Alex Middleton brought Killie back on level terms early in the second half, McAneny drilled home her second goal and the winner for Hearts with fourteen minutes remaining.

Following an exciting Biffa Scottish Women’s Cup quarter final weekend, Scottish Women’s Football are pleased to announce the semi final line up along with confirmation that Falkirk Stadium will play host to the two games.

The semi finals will see Heart of Midlothian take on Celtic and Partick Thistle take on Glasgow City at back-to-back games at Falkirk on 1st May. Both games will be live streamed on SWF’s youtube channel and tickets will go on sale later this week.

Commenting on the draw and confirming the cup semi-final venue, SWF CEO Aileen Campbell said: “We are so grateful to Ali for presenting our draw and taking the time to help support women’s football.

“We are delighted to take the semi-finals to Falkirk and are looking forward to two great ties that will showcase the women’s game and this important cup. This follows hot on the heels of our announcement of Biffa as our cup sponsor. We look forward to welcoming lots of fans to Falkirk and encouraging as many local people as possible to come and support the teams. Tickets will go live this week and kids will go free making it a really family-friendly event.”

Commenting, Jamie Swinney, CEO of Falkirk FC said: “We are delighted to welcome the Biffa Scottish Women’s Cup semi-final to Falkirk. Our stadium is a fantastic facility and a great backdrop for this important stage of this competition.

“We are great supporters of the women’s game and look forward to welcoming the teams and their supporters on 1st May.”

Whilst their rivals were on Biffa Scottish Women’s Cup duty, Rangers took the opportunity to open up a lead of five points in SWPL 1 when they won 1-0 at Motherwell on Sunday.

Lizzie Arnot scored the only goal of the game, just before the hour mark, to seal yet another win for her side and put them in a commanding position in the title race.

In SWPL 2, Boroughmuir Thistle have struck out for second place, opening up a three point lead over Glasgow Women with a 4-0 victory away to Stirling University. Ellie Taylor gave Boroughmuir a second minute lead which was quickly doubled by Mhari Smith and Taylor netted a second ahead of half time. Mia Chambers rounded off the scoring for her side with the final goal late on.

Queen’s Park meanwhile lifted themselves off the bottom of the table by beating St Johnstone 1-0. Rachel Connor scored the only goal of the game for the Spiders in the eighteenth minute to give them three crucial points. 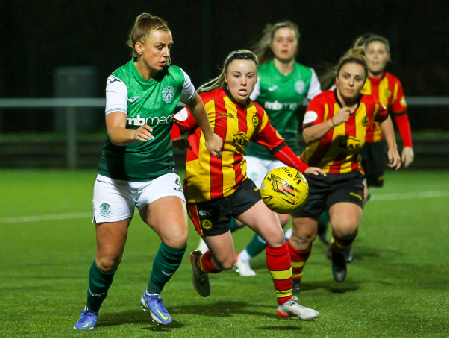