Derby County have had a good season in the FAWNL Northern Premier Division and their 2-0 victory over Fylde Women on Sunday has left them in the driving seat for the runners-up spot behind Champions elect Wolves.

Derby midfielder Emily Joyce described Sunday’s result as one of their best of the season and, whilst tinged with disappointment that winning the title in highly unlikely, she would take satisfaction if the club could equal the highest ever finish in its history:

WSS: Well done on a good win on Sunday, would you say that was one of your best results of the season?

EJ: I think it was. Fylde always give us a good game and with the added pressure of second place up for grabs, we knew how important it was to win.

WSS: Were there any anxious moments for the team before Sophie Domingo scored in injury time?

EJ: Yes, with the one goal difference there was the worry that Fylde would take one of their chances, even though I think we were more dangerous going forward and had opportunities to make it 2-0 a lot earlier. But it was a great moment when Soph scored to confirm the win.

WSS: And to round off the day, Imogen Maguire saved a penalty on her debut, was that the icing on the cake?

EJ: Yes - it could have been a very different game if Imogen had not saved the penalty. It was a brilliant save to top off a great debut performance and I know how happy she was to have kept a clean sheet.

WSS: This leaves you with two away games to play and two victories against Hull City and Sheffield FC would seal a top two place, are you confident that you can now do this?

EJ: Yes I think the last two games have brought us together even more as a team and we are going into the final two games confident we can finish the season on a high.

WSS: Overall, would you say that this season has been an improvement or do you feel you could have done even better?

EJ: If we win our final two games, it will be our joint best finish in the league for the club so this can still be seen as a positive. But as a team we are disappointed that we were not able to put up more of a challenge for the title, after some poor results in the New Year.

WSS: Is there anybody with the team who has had a good season for you but maybe hasn't quite had the recognition she deserves?

EJ: Sarah Jackson. She has been consistent all season and I think her performances have gone under the radar at times. She is a calm head on the pitch and a key cog in our defence.

WSS: What, for you, has been the highlight of the season so far?

EJ: The win at The City Ground, of course. To go there and win in front of their huge crowd and silence their fans really was one of the stand out moments of the season. That game gave us real confidence and we then went on a great winning streak.

WSS: Are you confident that you can go all the way and win the title next season?

EJ: There is still uncertainty around Derby County as a club at the moment but we are confident if we keep the core of the squad, we can challenge for the title again next season.

Our thanks to Emily! 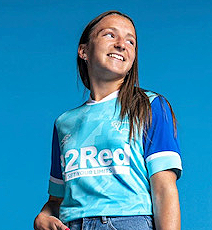