The final standings in the league’s first ever season were confirmed on Easter Sunday and for newly crowned Champions Swansea City, it saw the send to a successful campaign which saw them as the league’s inaugural winners.

Swansea completed their fixtures with a trip to runners-up Cardiff Met Women and the spoils were shared as the sides battled out a 1-1 draw. The first half was goalless but seven minutes after the restart, the Swans went in front with a goal from Stacey John-Davis. The Archers fought back and Emily Richards earned them a point when she equalised with seven minutes remaining.

Third placed Cardiff City Women meanwhile rounded things off in the league on a winning note, courtesy of a 2-0 success away to Aberystwyth Town, Megan Saunders scoring both goals during the first half.

In the Plate competition, it was all to play for at both ends of the table. Pontypridd Town were in pole position to take the title, needing just a point to take the crown with Port Talbot Town also in contention. The relegation battle was a three horse race, Barry Town Utd starting in the bottom spot at the start of the day, needing a win to stay up, The New Saints also needed to win to beat the drop, while a draw would have saved Port Talbot, who were in second place.

If things had been close between the four teams going into the matches, they were to be even closer at the finish.

In the end it was Pontypridd Town who held on to top spot despite being beaten 2-1 on the day by Barry Town. Mackenzie Olden gave Barry the lead two minutes before half time, and she netted her second early in the second half. Alison Witts pulled one back for Ponty with seventeen minutes remaining but Barry held on for a victory which guarantees their top flight status next season.

The New Saints meanwhile played host to Port Talbot Town and also picked up the result they needed, running out 4-0 winners. TNS went in front through Lexie Harrison in first half injury time and Emily Ridge made it two on the hour. Ridge added another goal shortly afterwards and Caitlin Chapman rounded off the scoring with five minutes remaining. TNS therefore ended up in second place in the section but spare a thought for Port Talbot who occupy the relegation position despite being only two points behind Plate winners Pontypridd Town. 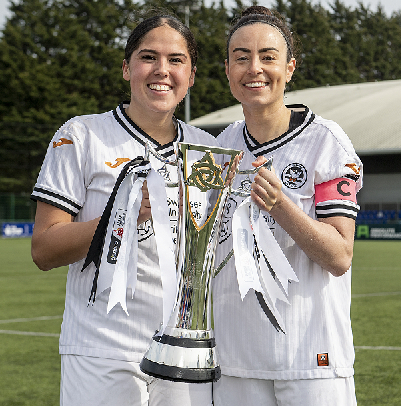