This season has been a memorable one for Needham Market as they carried off the Division One North title in the Eastern Region League.

In October, the First Team won their first ever Women's FA Cup game against Sprowston, in the Second Qualifying Round - goals that day coming from Lois Balfour, Jo Brawn (2), Lina Nagib and Abbie Fisher in a 5-1 victory. The First Team also knocked out two higher league opponents as they also made it as far as the quarter finals of the League Cup.

Next, came the league winning victory away at Newmarket Town, on the 27th February. The team battled hard to run out 2-1 winners, with all the goals in the first half, after two assists from Ellie Rossiter, for both Lina Nagib's clever finish one on one with the goalkeeper and Mia Etheridge's title sealing header. The team's highest scoring league win this season came in a 9-0 home win over Cambridge City Development, including a hat-trick from the season's top scorer Lina Nagib (26 goals).

“It’s been a great season, we’ve had many high points to look back at, and I’ve been really pleased of what we have accomplished so far!” says manager Warren Lewis-Claxton,. “The team morale is top class, and the team have shown that both on and off the pitch this season.

“It’s a great feeling [to win the league]! To be able to gain promotion, and in the way in which we have done it, I’m really proud of everyone. We’re looking forward for a new challenge next season.”

Needham Market have one more big date to look forward to, on Friday 6th May when they play AFC Sudbury in the Suffolk Women’s Cup Final at Colchester. 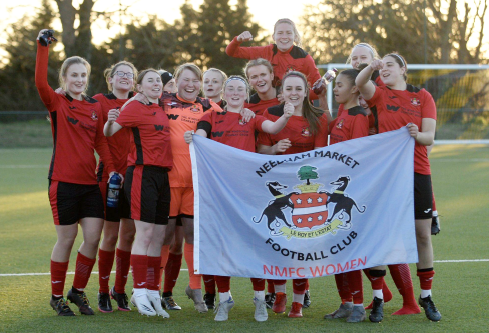