An interview with… Ellie Bishop

Norwich City have produced a fantastic run to take themselves to safety in FAWNL Division One South East and Sunday’s excellent 1-0 win over third AFC Wimbledon confirmed their status for another season.

16-year-old Ellie Bishop has been a regular in the team and the highly rated youngster has played her part in their four-match winning run which took them away from danger. She paid tribute to her team and the supporters and admitted that the relief at the final whistle was “immense”, and also revealed that she is excited about the club’s future and the young players coming through:

WSS: Congratulations on achieving safety in the league, is there a feeling of relief amongst the squad that you have made it?

EB: Thank you. It has been a tough season which I think we have all learnt from but there is a great relief amongst the squad (and management and coaching team) that we have pulled off the unthinkable by winning 4 games in a row to stay up with one game remaining. It is nice to be able to go into our last game with no pressure. The supporters played a massive part on Sunday, it was amazing to see so many people come out to support us and for me personally I had a lot of my family there watching me which meant so much and I wanted to make them proud. Was amazing to see so many young supporters there too and feel like you are inspiring the next generation. The relief and excitement at the final whistle when we realised what we had achieved was immense; something I won’t forget in a hurry.

WSS: You achieved it with a win against high flying AFC Wimbledon, would you say that was one of your best results of the season?

EB: Most definitely as we knew how important the game was. Wimbledon are a strong side that hadn’t lost a game since August so we knew it wasn’t going to be easy. We all played as a team and I think we showed the spectators how much we wanted it and that we weren’t going to go down without a fight. We knew we had to give it our all until the final whistle to secure those important points. Shaun (Head Coach) told us to believe in ourselves and we did.

WSS: What a time for Ellie Smith to score her first goal of the season! Were the last minutes very tense or were you always confident of the win?

EB: It was an amazing time for Ellie to get her first goal and so well deserved as although she is limited when she can play due to work commitments, she always makes such a difference to the team when she is there. She is a strong midfielder who battles so well and brings something different to the team and that paid off in this game with an amazing goal. I wish I could say the last few minutes of that game were not tense but they were, it felt like forever waiting for that final whistle. We had a great first half with lots of chances but Wimbledon came out fighting in the second half and threw everything at us but we dug deep and I think we defended excellently. Although we are a young back four, we are strong and have a great goalkeeper in Bryony [Williams] too who pulled off some crucial saves. However I do think we all believed we could do it if we played like we knew we were capable of. We had to believe in ourselves and each other.

WSS: The win was your fourth in a row, so you hit your best form at exactly the right time. Was there a change in tactics or formation, or did things just click for the team?

EB: We certainly did hit our best form of the season at exactly the right time. There was no change at all in tactics or formation, we just played the way we always do but think we knew how much was at stake, we all wanted it so much. I think as a team we have grown as the season has gone on as we have had a lot of new players this year and we needed time to cement and get used to playing together. We have an amazing team spirit and I think that showed in these last few games, we wanted to win and stay up for each other, for Shaun and the rest of the management staff and for the club and supporters. A lot of us are huge Norwich City fans, myself included and it means a lot to play for our club and we wanted to do them proud.

WSS: This of course takes the pressure away from your final game against Queen's Park Rangers next week, so are you confident that you can keep this good run going?

EB: Team morale is so high at the moment and we are all still buzzing from Sundays game and result so I am confident that without the added pressure of needing to get a result that we can keep our good run going. We will certainly all enjoy this last game playing together.

WSS: The fight to stay up has been a close one throughout the season, overall, do you think that the division has been tougher this time?

EB: This is a difficult one for me to answer as being only 16, this is my first season in adult football and playing for Norwich City Women so is hard for me to compare. But from what I have heard from some of the other girls, it has been tougher especially as there were four teams being relegated this year instead of two, due to a reshaping of the leagues. Also you have the likes of Billericay and Hashtag in the league which are very strong clubs with a lot of financial support behind them.

WSS: Do you feel that the team can build on this run going into next season, and aim higher in the table?

EB: 100%, the club has big ambitions to grow the women’s team and this has been shown by the club bringing the women’s team inhouse recently. It’s amazing to have the backing of the club. They want to build on this season using the pathway through the CSF academy programme which is bringing through some exciting new players. Quite a few of the current team have come through the youth system including myself, Jess Harper, Chardonnay Johnson, Freya Symonds, Katie Lee, Ella Gambell, Leliah Gooding so it shows this system works. I have loved being able to play with these girls this season. I have been in the NCFC academy programme since Under-8s and gone all the way through with Jess Harper so it’s been pretty special to have shared this season with her. They are a great set of players who are all so passionate about the game, the senior players have all really took me under their wing and taught me so much and I can’t thank them enough. The same with Shaun and the other coaching staff, they have given me this opportunity and believed in me which I’m so grateful to them for.  It has been such a learning curve for me but I’m so pleased I can say I’ve  been a part of it and I’m just so glad we finished on a high as I know how hard we have all worked and how much it has meant to all of us. There is no reason why next season we should not be looking to aim for at least a top six finish. It is a really exciting time for the squad, this is very special.

Our thanks to Ellie! 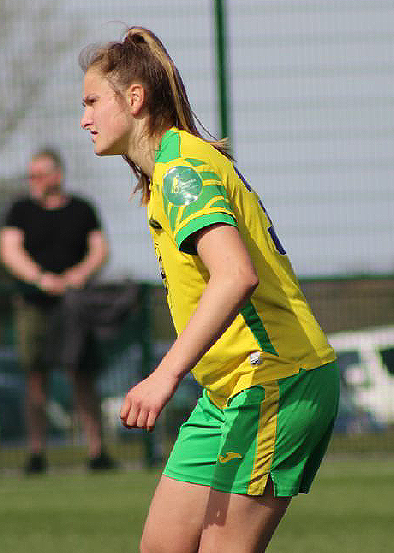