An interview with… Charlotte Greengrass

Nottingham Forest picked up the FAWNL Plate on Sunday with a 2-1 victory over AFC Wimbledon in the Final at Solihull.

Charlotte Greengrass played a big part in the win and defender told us of her pride in lifting the trophy and high hopes for the club’s future:

WSS: Many congratulations on winning the Plate on Sunday, how much has the team enjoyed your success?

CG: Thank you! It was a great feeling to get some silverware for the club. We've been really pleased with our performances in general across the plate competition. We've travelled all across the country and come up against some tough opposition where we've really had to battle, so to win the plate was the perfect way to round a successful campaign off.

WSS: You went into the game as favourites due to your higher status than AFC Wimbledon, did you feel any pressure at all?

CG: There is always some level of pressure going into a final, particularly when your opposition has that underdog status. That being said, our mantra all season has been to earn the right to play in games and that definitely didn't change coming into the final. Regardless of AFC Wimbledon's position in the pyramid, our aim was to earn the right to play and we did that. That ultimately led to us putting in a great performance and winning the game. That doesn't take away from the fact Wimbledon gave us a great game, one which I am certain the fans enjoyed. They had a brilliant cup run and they've put a great advert out for the good work that is happening in the Division One leagues.

WSS: What was it like in the last few minutes, and then when the final whistle blew?

CG: After a really attacking and dominant first-half performance, the second half called for us to dig in to ensure we saw the game out. Whilst Wimbledon did have a few chances, I think we felt in control as we approached 90 minutes. We stayed switched on throughout and denied Wimbledon any way back into the game. And it was a brilliant feeling when the ref blew the whistle. It was like he blew the whistle on all our months of hard work leading up to that point and the final was that last hurdle for us. We'd put in a performance to be proud of so we were all so buzzing when we were finally able to say we were winners.

WSS: Now you have had a taste of winning a trophy like this, can you see it driving the team on for more success in the future?
CG: Yeah, I think it's definitely given us an added hunger to keep winning silverware for the club. It's also been a long time since Nottingham Forest Women has won any silverware so it was amazing to be a part of bringing a trophy back to Nottingham. We are a team that wants to win and take Nottingham Forest as far as we can and silverware gives us and the club that deserved recognition. We have our County Cup final coming up in a few weeks now and that's another opportunity for us to get another trophy to our name. From there, we want to keep bringing those trophies back and I truly do think the sky is the limit for us.

WSS: This week you go back to the league and a top four place is still on offer if you can beat Brighouse Town. Is that going to be any extra incentive going into the game?
CG: We want to finish in the best position possible this year so it will definitely be in the back of our minds going into the Brighouse game. That being said, Brighouse are equally going to want to come and right some wrongs after we won the reverse fixture. We know it's going to be a battle and that's something we are ready for. The top four spot is also dependent on how other teams fare in the last game of the season so we are concentrating on controlling what we can and that's our performance. I am really looking forward to it and think it will be a brilliant way to end our league campaign. It's also going to be a great feeling to finally finish a season after two years of COVID wreaking havoc on the league.

WSS: How would you say the season has gone for the team overall, any other  highlights apart from last Sunday?
CG: I think we are disappointed to not have done better in the league this season. The ability of our squad is arguably one of the best in the league so to fall short of the targets we set ourselves at the start of the season is frustrating. That being said, we have still had a multitude of highlights across the season. We've played two brilliantly received games at the City Ground, Derby in the league and Man City in the Fourth Round of the FA Cup. I have to say the latter will go down as one of the most memorable in my football career so far. It was an amazing day for us and the club and I was beaming with pride, regardless of the result. We got to play some of the best players in English and world football, it doesn't really get better than that! On a personal note, to get a hat-trick in our away fixture to Middlesbrough was a highlight for me. I think across the season, we have seen the potential we hold as a group. While it may not have fallen into place for us at times, we're definitely focusing on those positives and using them to drive us into next season.

WSS: Are there any players who have had good seasons but maybe don't get the recognition they deserve and do you have any young players coming through who you feel have great potential?

CG: I think the first player that comes to mind who has found incredible form since Christmas is Niamh Reynolds. You can see how much she's grown in confidence since the start of the season and I think she's become a really integral part of our midfield. Her ability with the ball at her feet and her work ethic are going to take her as far as she wants to go, in my opinion. Our American duo Gianna Mitchell and Naomi Powell have also been brilliant for us this season. They really drive the standards and intensity in training and you know you'll always get something special from them in games. In terms of young players, Alice Higginbottom is definitely our young star. It's hard to believe at times that she's only 17! She has so much raw talent, a great attitude and is a pleasure to have on the team. The future is definitely bright for Alice and I am excited to see where her journey takes her. Our reserves and development teams also boast a host of great players and they always slot in well into first team training sessions when they are asked to step up.

WSS: Do you think that you are capable of making a serious challenge next season?
CG: Definitely. As I said, we are disappointed with our league campaign but there are positives to take. We have played some brilliant football across the season and learnt so much. With us falling short of our goals, we have that fire in our belly for the 22/23 season and want to go out and dominate. We've got 1 trophy to our name and are hoping to have another with the county cup as well as rounding off the season with a win against Brighouse. That will put us in a great position going into next season and we'll be ready to do everything we can to secure promotion.

Our thanks to Charlotte! 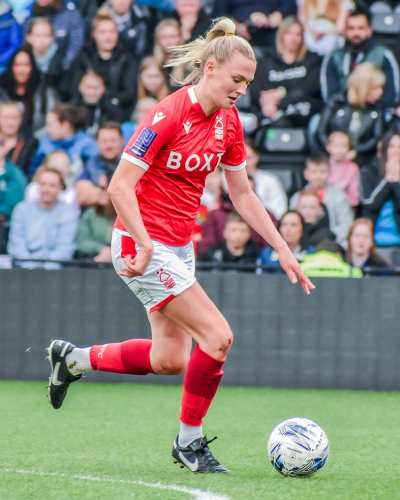