The 37-year-old will officially hang up her gloves at the end of the current 2021/22 campaign,bringing the curtain down on an illustrious and trophy-laden career spanning two decades. Born in California to Mancunian parents, she spent the formative years of her career playing college football with Cal State Fullerton Titans alongside stints with Ajax America Women, Pali Blues and Sky Blue FC.Courtesy of her parentage, it was in the early noughties that she received her first call-up to the England national team, playing at U19 and U21 level before earning her senior stripes in the Algarve Cup in March 2005 in a 4-0 win over Northern Ireland. This was to be the first of 82 caps for the Lionesses, with Bardsley going on to represent the team at seven major tournaments, alongside being ever-present for Team GB’s women’s football team at the 2012 London Olympic Games.

She figured prominently as England finished as runners-up in the UEFA Women’s Championships (2009), won the Cyprus Cup (2013 and 2015), secured a third-place finish at the FIFA Women’s World Cup (2015) and lifted the SheBelieves Cup (2019). With her heart seemingly lying in England, after a spell in Sweden with Linkopings FC in 2011-12, the shot-stopper made the switch to British soil in 2013 with Lincoln Ladies. Later that year however, Manchester City came calling and the rest is history.

Winning the Continental Tyres Cup in her first season in Manchester, she played a crucial part in the treble-winning year of 2016-17 as City won the same trophy again alongside the FA WSL league title and Women’s FA Cup. More successes arrived in the years that followed, with a double-winning campaign in 2018-19 – including a heroic penalty shoot out performance in the Continental Tyres Cup Final against Arsenal at Bramall Lane.

Unfortunately suffering a hamstring injury in a 2019 World Cup quarter final against Norway, Bardsley rehabilitated during the 2019-20 campaign and enjoyed a spell on loan at OL Reign in early 2021 after making her 100th City appearance against Liverpool in November 2020. Earning a spot in Team GB for the Tokyo Olympic Games last year, injury sadly saw her forced to withdraw from the squad ahead of the tournament.

With the conclusion of the current campaign on the horizon, Bardsley has officially announced her retirement from the game, marking the end of an incredible career.

Speaking about her decision, she said: “It was obviously a pretty tough decision for me to make, but after a lot of deliberation and unfortunately being away from the pitch for quite a while now due to injury, it just felt like it was the right moment.

“As sad and strange as it is to be stepping away from something I’ve committed my entire young adult life to, ultimately it’s something I feel really proud of and I can honestly say, hand on heart, that I’ve left no stone unturned and I have no regrets about how I’ve applied myself and what I’ve achieved.

“I feel incredibly proud of my career, but ultimately I’m really excited about the next steps and what is to come in the future, and I’m just very much looking forward to giving back to the football community in many other ways.”

Omar Berrada, Chief Football Operations Manager at Manchester City, said: “I am sure that I speak for everybody at Manchester City when I say that it has been an honour to have Karen at the Club for the past eight-and-a-half years.

“She is a consummate professional both on and off the pitch, while her passion and commitment to making a difference and positive change in whatever way she can is truly admirable.

“I have had the pleasure of working with her directly over the years and as I’m sure anybody who has met her will attest, she is an incredibly talented individual, with so many strings to her bow.

“I’d like to wish her all the best in this next step of her career as she hangs up her gloves, and I know that she will continue to be a real pioneer in the women’s game.”

“She has been a truly incredible servant of not just Manchester City, but the game as a whole, and has been an influential figure in some of the most iconic moments for both club and country.

“She is without doubt a real legend of the game, and it has been a pleasure to be on this journey with her, seeing her grow professionally both on and off the pitch.

“I have every faith that her future away from the field is an incredibly bright one, and I look forward to seeing her make her mark on the women’s game and beyond in many ways in the years to come.”

Head Coach Gareth Taylor also said: “Karen has left an undeniable mark on women’s football, and I believe that her playing career is just the start of the overall impact she will make.

“Although injury has limited her appearances on the pitch during my time in charge, she has remained an integral member of our team and has made a real difference behind the scenes.

“She deserves all the plaudits that she receives, and I would like to wish her the very best for the future and the next step of her journey.” 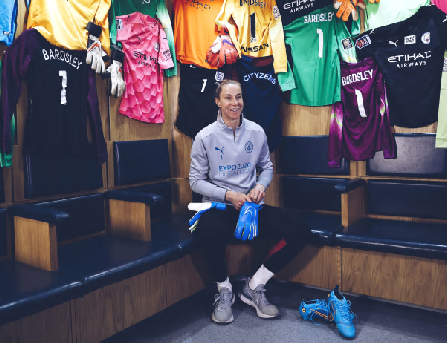