Manchester City Football Club can confirm that midfielder Jill Scott will depart the Academy Stadium this summer when her current contract ends.

Bringing the curtain down on a trophy-laden eight seasons in sky blue, the 35-year-old has firmly left her mark on the Club, with her contributions to the team’s successes undoubtedly earning her legendary status on the terraces.

Signing back in late 2013 from Everton after spending seven years with the Toffees and cementing her position as one of English football’s brightest stars, Scott immediately settled into life in Manchester and quickly became a stalwart in City’s midfield. Winning the Continental Tyres Cup in the team’s first season as a professional outfit, more trophies followed in the years to come including another three league cups, three Women’s FA Cups and one FAWSL title.

She also quickly became a popular figure not only with her team mates, but with the club’s supporters courtesy of her amiable and larger-than-life personality.

During the latter stages of her time at the Club, the midfielder enjoyed brief loan spells with fellow Women’s Super League sides Everton (2020-21) and more recently Aston Villa (2021-22).

This summer however will see Scott move onto pastures new, with her set to leave City at the end of June when her current contract concludes.

She will be honoured at a to-be-confirmed Manchester City Women home game next season for her contributions to the football club, with fans set to be able to show their appreciation to her with a special presentation.

Speaking about her departure, Scott said: “In a way, I never thought I'd be here saying goodbye to Manchester City, but all good things come to an end eventually and I’ve had so many amazing memories along the way.

“I’ve had some great opportunities over the last couple of seasons too with my loan spells, but I’ve always missed everyone here and that will definitely be the case again this summer.

“It’s been a real journey over the last eight or so years – I remember sitting down and hearing the plans of what the Club were going to do, and I was so excited to be a part of that.

“Looking back at what we’ve achieved in that time in terms of trophies and generally as a team, I can’t really believe it. I’m forever grateful that I’ve been surrounded by such talented players and coaching staff who have enabled me to develop and grow as a player.

“I’d like to say a massive thank you to our supporters too – they’ve just been incredible, especially for me personally, and I feel as though we’ve built a special relationship over the years.

“I’m sure we’ll stay in touch wherever my next step takes me and they know, as with so many people at City, that they’re always welcome for a coffee!”

Omar Berrada, Chief Football Operations Manager at Manchester City, said: “It has been an absolute pleasure to have had Jill, a player who has done so much for the women’s game as a whole, here at Manchester City for the past eight seasons.

“She has played a hugely influential part in our women’s team’s various successes during that time, but has also endeared herself to everybody at the Club as well – she is one of football’s finest characters and we’re incredibly proud to have had her represent us for such a length of time.

“Jill has firmly written her name into our history books for what she has achieved while at City and on behalf of everybody here, we’d like to wish her all the best in the future, wherever her next step in the game may take her.”

Gavin Makel, Manchester City Women Managing Director, added “It has been an honour and a privilege to have had Jill at the Club for the past eight-and-a-half years.

“From the initial meeting I had with her back in 2013, her passion for the game was clear to see from the outset and it has been such a pleasure to watch her grow into one of English football’s biggest names and personalities.

“She joined us at the start of our journey as a professional outfit and has made an undeniable impact on Manchester City as a whole during her time here, both on and off the pitch, with her infectious enthusiasm to want to develop whilst helping others along the way ensuring that she is now a true role model for the women’s game.

“She has deservedly earned her place in the Club’s folklore, and we wish her all the success for the future.”

Head Coach Gareth Taylor also said: “Playing 194 games for one club is an incredible achievement, and Jill has played a crucial part in so many of the team’s successes over the years alongside making such a difference to the game as a whole.

“Her dedication and commitment to this Club both on and off the pitch is testament to her character and she leaves Manchester City with legend status and the gratitude of everybody here for her contributions.” 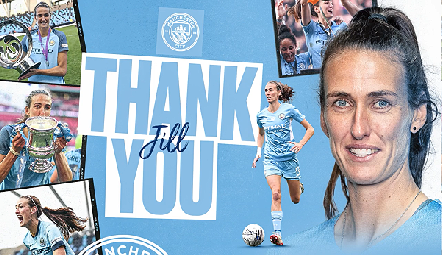