Netherton United have come to the end of an ‘invincible’ season where they have won the League and Cup double in the S-Tech Cambridgeshire Women’s League.

The team’s statistics in winning the Division One are extremely impressive - a 100% record which saw them win all 16 games, scoring 161 goals in all competitions and keeping eight clean sheets.

Netherton are managed by Lee Martin, who is also the Club Chairman, with Megan Stickland as captain, she doubles up as club Secretary. Yas Green has enjoyed a great season in front of goal, scoring 57 times to win the league’s Golden Boot, whilst Emily Johnson weighed in with a further 41 goals. The club is sponsored by Toojays Training & HR Consultancy Ltd.

Netherton won the league by a healthy margin of eleven points from Cardea Ladies, who finished as runners-up.

“A key achievement for us would be, aside from the double, being one of only two Step 7 teams nationally to get as far as the Second Round proper in the Vitality Women’s FA Cup, having never previously got further than the Preliminary Round,” says manager Lee Martin, whose side eventually went out to National League side Long Eaton United.

“For our best performance, there have been a few, but coming from two behind to win 3-2 against Anstey Nomads in the FA Cup, as well as being 3-0 down at half time and coming back to win 4-3 with a 94th minute winner from Jenna Nair in the League Cup semi final against Peterborough United FC Foundation, both stand out.

“We also scored 21 times in a tie in the Northants County Cup, where we ended up as semi finalists, losing to eventual winners Northampton Town.” 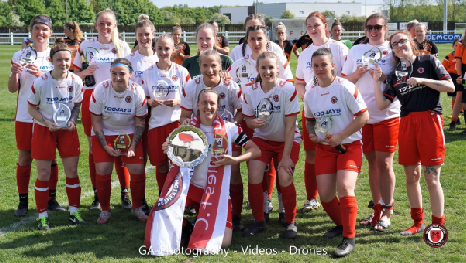