Sunday was a red letter day in the history of Glasgow Girls & Women FC, as they won promotion to the top flight in Scottish women’s football with a 3-1 victory over Boroughmuir Thistle.

Lucy Ronald captained the team to victory in a game where the winning team would be promoted, and scored the second of the team’s three goals from a free kick. She admitted that the team’s achievement has not sunk in just yet, but also that everyone at the club is excited at the prospect of taking on the best teams in the country next season:

WSS: Congratulations on the win and promotion, just how big an occasion for the club was it on Sunday?

LR: Thank you, it was unbelievable for the whole club. It was amazing to see the amount of support we got down to the game and I think that spurred us on even more to get the job done. A very special day for everyone involved.

WSS: How pleased were you with the team's performance when it mattered most of all?

LR: I’m incredibly proud of the team, not just on Sunday but all season the work rate and desire to get promotion has been unreal. There’s a real belief throughout the dressing room and I think that was apparent in the way we played on Sunday. It was a real team effort and everyone fought for each other until the final whistle.

WSS: What was the moment like when Mhairi Lyle scored your third and decisive goal, and when the final whistle went?

LR: I think Mhairi’s goal for me was a special moment. It was then when I started to believe we were actually going to do it. It was such a well worked team goal also which is always nice. The feeling when the final whistle blew is one I don’t think I’ll ever be able to put into words. We knew how much it meant to everyone involved with the club and it’s a huge honour to go down in the club’s history as the first team to take Glasgow Women to the top flight of Scottish women’s football. That is something very special.

WSS: Now Glasgow Women are a top flight team! Has that quite sunk in yet?

LR: Nope! I’m not really sure when it will to be honest. I think especially after being written off at the beginning of the campaign and then to have that wobble where people said we weren’t going to do it makes it all the more unbelievable!

WSS: Is there anybody with the team who has had a good season for you and made a big contribution but maybe hasn't quite had the recognition she deserves?

LR: I think I have to probably single out Eve Donald. For me Eve has been an absolute stand out performer week in week out for us. She’s an incredible player and an even better person and I love sharing a pitch with her.

WSS: Similarly, off the pitch, are there many people who put a lot of work into the club and the team?

LR: I’ve got to say every one of the coaching staff spend a ridiculous amount of time behind the scenes for us players. I think on behalf of the whole team, I thank them all for their continued hard work, dedication and time. They gave everything to ensure we had the best chance at promotion.

WSS: You have played against the top teams in cup ties during the past but now you will play them on equal terms in league matches, how much are you all looking forward to that?

LR: It’s amazing. The talent in SWPL1 is unbelievable and we are excited to go and test ourselves against top players. It’s the kind of games you learn the most from and something we look to take in our stride.

WSS: It's early days of course, but how confident are you that the team can thrive at the highest level?

LR: You’ve got to have confidence. I certainly have confidence in every single one of the girls. We know that it’s going to be a massive challenge for us but one we are really looking forward to.

Our thanks to Lucy! 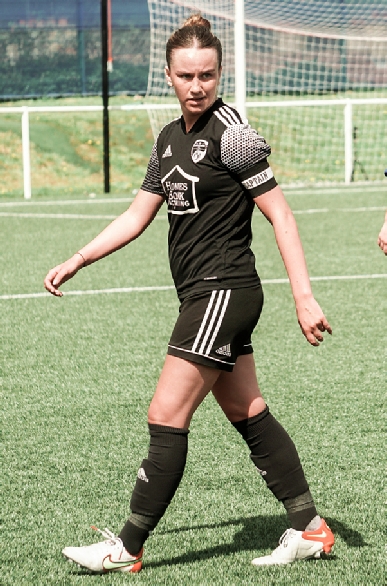