Narrowly missing out on promotion the season before on goal difference, Eaton Socon Ladies knew there was another push for promotion in them this coming season.

Good recruitment in pre-season meant that manager Richard Conby had a squad for a title charge. Opening the season off with a big win against their local rivals Brampton (8-1) and a 2-2 draw against Cambridge Rangers, not knowing they would be their promotion rivals throughout, Eaton Socon got off to a great start to the season with win after after win in the league.

Although some disappointing cup results, their season took a crucial turn with a last minute winning header against Park Ladies from stand in captain Hannah Hutchinson to win the game 3-2 after being two down at half time. A massive result for Socon and a big step in the right direction for their mentality too. Leading up to and over the Christmas period, Eaton Socon kept up the beautiful football on display and kept up the run of wins collecting three points every game with the strikers, Shannah Anico and Kendal O Connor scoring highly throughout these fixtures on the chase for top goalscorer in the league. With a few top of the table games being rearranged, Eaton Socon Ladies were holding top spot up with all eyes being a game against second placed Cambridge Rangers.

Two more cup disappointments followed with one being particularly heavy, which could have derailed their league campaign. Manager Conby rallied round his players and they pushed on and grew more and more confident throughout. All eyes were on the Cambridge Rangers match in the League with it being ‘cannot lose’ for Eaton if they were to fulfil their dream of winning the league.

Although a few big players were missing, Eaton managed to keep Rangers at bay with a 0-0 draw and a well earned point with one particular world class save from goalkeeper Keeley Robinson in her debut season.

With that game out of the way, three wins from four and the title was theirs. More high scoring games followed and in the last game of the season needing one point to be crowned invincible League Champions. With Kendal O Connor needing only two goals to end as top goalscorer, Eaton Socon took on Waterbeach for one last push to be unbeaten throughout their league campaign. Kendal bagged a hat-trick and Eaton won 6-0, meaning all the hard work, sweat and tears was worth it.

An unbelievable achievement, not just for the team or the manager, but for the club as a whole, promoting Eaton Socon into the Championship from Division Two. To win a league is unbelievable but to do it throughout a campaign without losing a league game is something truly special. Captain Hannah Hutchinson and club captain Gemma Cooksley (out through being pregnant) lifted the league trophy and Kendal O Connor finished as league top goalscorer with 28 goals. 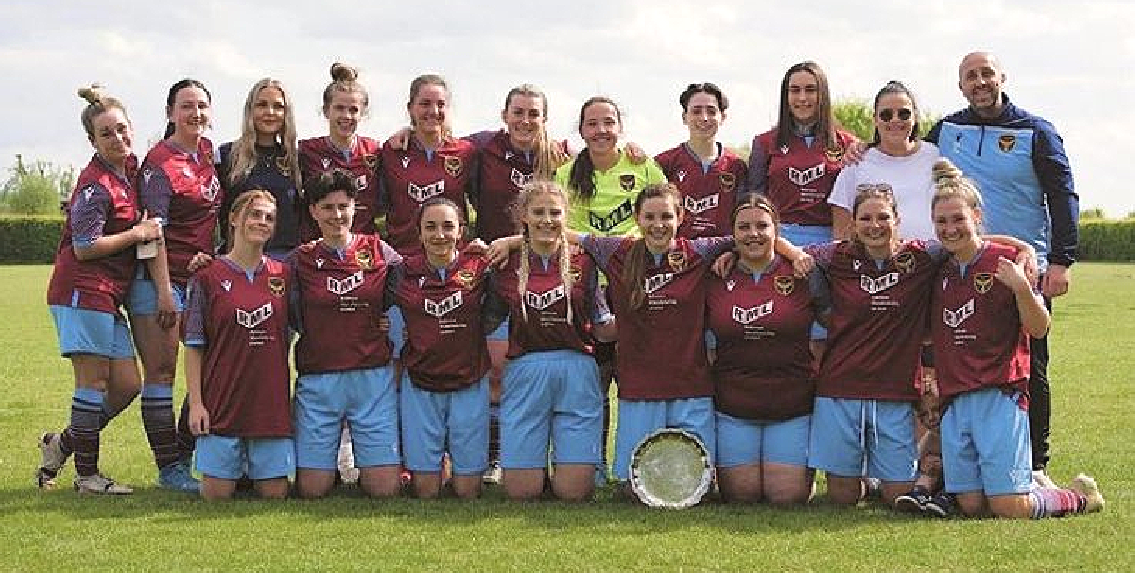