Name and identity change for WSL and Championship

The Football Association can today confirm the beginning of a new era for the Barclays Women’s Super League and Barclays Women’s Championship with the launch of a new visual identity and name change ahead of the 2022-23 season.

The rebrand will also see the naming convention altered for the two competitions, with ‘The FA’ dropped from the title of both the Women’s Super League and Women’s Championship. This represents the long term strategy for the leagues to be under new ownership in the future, with this process ongoing.

The 2021-22 campaign saw unprecedented interest in the women’s professional game, with Sky Sports and the BBC driving visibility in the first season of the new broadcast deal announced last year, while commercial interest continues to grow – highlighted by Barclays renewing their sponsorship of the Women’s Super League and becoming the new title partner of the Women’s Championship from next season.

The sponsorship of the Women’s Championship for the first time and renewed commitment to the Women’s Super League last year sees the organisation’s cyan colour added to the refreshed brand to better align the two competitions.

The refreshed branding will be activated immediately, with all assets associated with the two leagues being updated and available to download from today.

Kelly Simmons, the FA’s Director of the Women’s Professional Game, said: “We’ve seen tremendous strides made in the women’s professional game since it turned professional four years ago, which meant we needed a refreshed branding that reflected that progress.” 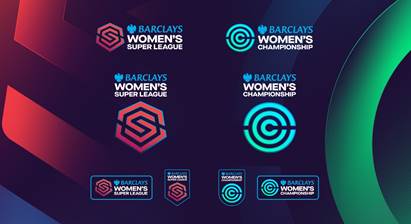