Bury AFC Women had a fantastic first season after being set up last summer, crowned with both sides winning their respective divisions in the Greater Manchester Women’s League and their first team being promoted to the North West Regional League.

Head of Women’s Football at the club, Casey Lynchey, spoke of her delight at the club’s early successes, saying: “As a club we have achieved everything we could have hoped for in our first season… and more! When we first set up the women’s elite team a little over a year ago, it wasn’t difficult to attract a really strong group of girls, with quite a few who had played at a higher level in different teams and others who were interested in what we wanted to achieve.

“Bringing them together, I had no doubt that they had the potential to achieve highly and I was ambitious in my drive to ensure a league placing in the highest division possible for their inaugural season. Recruiting Jake [Williams] as manager was the missing piece of the jigsaw and alongside Ste & Kelly, we quickly managed to build a really strong coaching team.

“Winning the league and gaining promotion to the North West Regional League was always the main aim, and everyone worked hard to achieve that. Reaching the semi final stage of the three cups, whilst it was obviously disappointing not to progress further in any of them, was again something quite remarkable for a brand new team. Reaching the semi of the Manchester FA County Cup especially was a highlight of the season, beating teams from the league above on the way.

“It didn’t stop there! Such was the interest at trials and amongst our recreational teams, I decided that we shouldn’t lose the opportunity to set up a reserve squad. Whilst some might have thought this was a tad ambitious in the first season, I knew that our well established recreational committee could support this and our existing coaches in Sam, Craig & Jack were more than willing to step up to the challenge. Again, what an inaugural season it turned out to be - with the reserves winning both their league and league cup in the GMWFL! “

Things were not just confirmed to the two Sunday sides, though. “Our women’s recreational sides went from strength to strength, too!” continued Casey. “With around 200 registered members, we are one of the biggest recreational football clubs in the country. We entered five teams into the newly set-up Manchester FA flexi nine-a-side League.

“This gave an opportunity for all our players, of any age and ability, to play competitive football. Not only did our Rec A team win the league, but we also added more silverware when two of our teams won the Manchester FA Eurofest five-a-side competition.

“Personally, it has been an absolute honour to head the women’s football section and watch teams flourish alongside our very successful men's team. So many people have helped us along the way - as a fan owned club, Bury AFC has an army of volunteers and I’d like to thank each and every one of them for all their support and encouragement in our first season.”

Bury manager Jake Williams added: “As soon as the Bury AFC women’s first team role was offered to me, I quickly realised the size of the job and the expectations that came with it. This was a first for all involved: new manager, new players, and new coaching team. The first thing I did was bring in an old friend (Steven Mainwaring) as my assistant who has both played at a high level and has a wealth of knowledge about the game. Our first task was to plan pre-season, and we wanted to test ourselves against so-called ‘better’ opposition to gauge where we stood as a group.

“Going into the season opener, we felt we were in a good place and the preparations leading up to that game had been positive, but as a team we still felt pressure to perform and show the rest of the teams in the league what we were about. A 3-2 win away to Old Boltonians for our first ever competitive league game gave everyone a massive boost and it felt like a weight had been lifted. In our second game and first at our new home ground at Unsworth Cricket Club against Athletico Middleton, we found ourselves 2-0 down with 20 minutes to go - what happened next made me realise just what a group of players I had with me. We scored an unbelievable four goals in that 20 minute period, showing the resilient attitudes of the players were evident for all to see.

“The games kept coming and so did the results. We were on such a roll coming up to Christmas ad with the weather starting to turn, we made the decision to switch to an astroturf pitch just to keep the momentum with us, this proved to be a good decision made with my management team as we finished 2021 top of the league. We beat our next closest contenders and previous league winners, Mossley, in a stand out performance.  It was about this time when we realised that we were gathering a nice bunch of travelling fans who were really getting behind the women and showing their support.

We struggled to get many games played in January as most of our remaining fixtures were away matches and the weather wasn’t kind. Then unexpectedly, the league hit us with the news that another round of fixtures would be added to the season; all of a sudden, we went from four remaining games to having 11! This shook us a bit after a stop-start beginning to 2022. It’s difficult when you can almost see the finish line and then it’s completely removed from sight. However, we knew we just had to keep working hard in training, regroup, and try to build momentum again once the bad weather was over.

“The two games which would ultimately decide the title came firstly against Mossley (who had caused us problems in previous meetings) and then title rivals Athletico Middleton. The first was a 1-1 draw, but we were much the better side, and but for a couple of good saves from the Mossley keeper, we could have won it. That result set up a huge game which was an ‘avoid defeat at all costs’ fixture as they (Athletico) had a couple of games in hand, and a win would put the league in their hands.

“The group knew the importance of this game, and just like they had done so many times over the course of the season, they delivered when it mattered. After going down twice in the game, we went on to win 4-2. When that full-time whistle went, it was just a huge relie,f and the celebrations in front of the 250 or so fans were unbelievable. To go all season unbeaten in the league is a huge achievement and one I am very proud of. This was a huge effort from everybody involved: the club, my management team, and the players. I can honestly say I’ve enjoyed every minute of it and look forward to the challenge that the North West Regionals will bring next season.“ 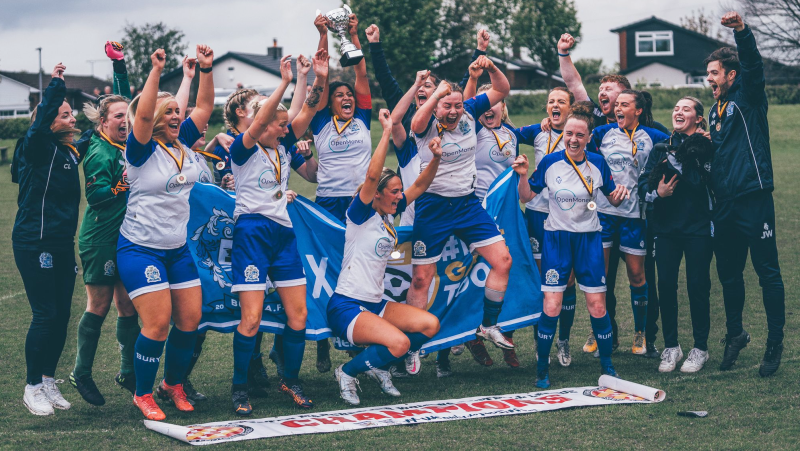